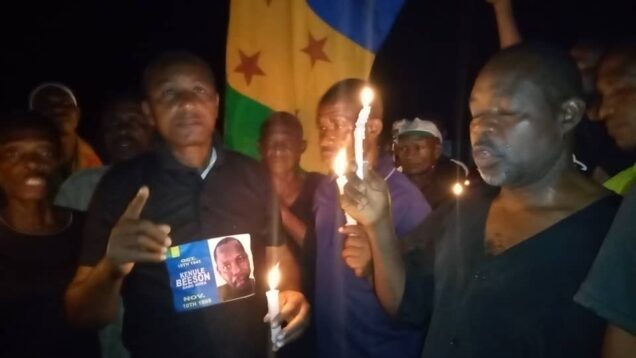 The Movement for the Survival of the Ogoni People (MOSOP) on Tuesday night held a candlelight vigil to mark the execution of Ken Saro Wiwa and eight other Ogoni rights activists by the Nigerian Government led by General Sanni Abacha 26 years ago.

MOSOP President, Fegalo Nsuke in a statement he issued on Wednesday said “26 years still looks like yesterday to us.

The statement reads: “We commend the resilience and commitment of the Ogoni people for living the essence of the sacrifices of these nine great minds who became victims of an unjust system because they stepped out to confront our oppressors with the hope of reordering our system towards a just, fair and progressive direction.

“We commend you for standing to see that the sacrifices of Ken Saro-Wiwa, Saturday Dobee, Nordu Eawo, Daniel Gbooko, Paul Levera, Felix Nuate, Baribor Bera, Barinem Kiobel, and John Kpuinen are not in vain.

“We have faced lots of challenges and despite violent attacks, our peaceful disposition has remained unchanged.

“We commend your outstanding turnout yesterday during the candlelight vigil. You were marvellous and the turnout was incredible. We must all build on that and move strongly towards a peaceful resolution of the Ogoni problem.

“We have been battered, brutalized, repressed, arrested, tortured by the political class in connivance with various levels of governments especially the Rivers State Government and allies of the Nigerian oil industry.

“Notwithstanding, we have stood very strong to sustain our struggle for basic rights and freedom. Quite devastating is that some of those who were with us yesterday have turned against us. Induced by petrodollars, they yielded to the game of the enemies.

“We have even become divided by eternal forces especially the government paid chiefs.

“It reinforces the words of Ken Saro-Wiwa when he said: “The military does not act alone. They are supported by a gaggle of politicians, lawyers, judges, academics and businessmen, all of them hiding under the claim that they are only doing their duty, men and women too afraid to wash their pants of urine. We all stand on trial, my lord, for by our actions we have denigrated our Country and jeopardize the future of our children.

As we subscribe to the sub-normal and accept double standards, as we lie and cheat openly, as we protect injustice and oppression, we empty our classrooms, denigrate our hospitals, fill our stomachs with hunger and elect to make ourselves the slaves of those who ascribe to higher standards, pursue the truth, and honour justice, freedom, and hard work. I predict that the scene here will be played and replayed by generations yet unborn.

“Some have already cast themselves in the role of villains, some are tragic victims, some still have a chance to redeem themselves. The choice is for each individual.”

“We are glad that despite these violent assaults, you have remained peaceful and sustained the struggles that made this day very significant in our lives. MOSOP remains committed to the non-violent approach and our demands for justice for the Ogoni people in Nigeria.

“We urge the Nigerian Government to accept our peace initiatives and recommendations to address this prolonged and very costly struggle.

“We acknowledge that the November 10, 1995 hangings were unjust, it set us back not just as a people but as a nation.

“The judgment of Justice Ibrahim Auta itself gave a 30days grace period for an appeal, Ken Saro-Wiwa and the eight others were denied the right to appeal and hanged 10 days later.

“MOSOP, therefore, makes the following demands on the government and peoples of Nigeria:

1. We demand speedy actions to review the judgement of the military tribunal which sentenced the 9 Ogonis we celebrate today to death with the sole purpose of exonerating them from the crimes which, of course, they never committed.

2. We call on the government to review and implement the recommendations of MOSOP as contained in the proposals for the implementation of the “Ogoni Development Authority” as the pathway to peace and development of Ogoni.

3. MOSOP calls for the restructuring of Nigeria to accommodate Nigeria’s multi-ethnic nature. Particularly, we demand the creation of a Bori State to cater for the needs of the Ogoni people as a distinct ethnic nationality in Nigeria.

4. MOSOP urges the Nigerian Government to end the continual harassment of the Ogoni people and civil rights actors by the Nigerian Police who have shown vulnerability to the wishes of some persons within the Ogoni political class.

5. MOSOP pledges to cooperate with every effort to advance the peace and development of Ogoni especially in respect of the above demands.

“We urge all Ogonis to remain hopeful despite our travails in this very long and tedious road to freedom. We assure the Ogoni people of our commitment to sustain the message for peace, freedom and development no matter the strength of our attackers. We cannot be stifled into submission.

“I end with the words of Ken Saro-Wiwa: “The Struggle Continues”

“God bless you all!”