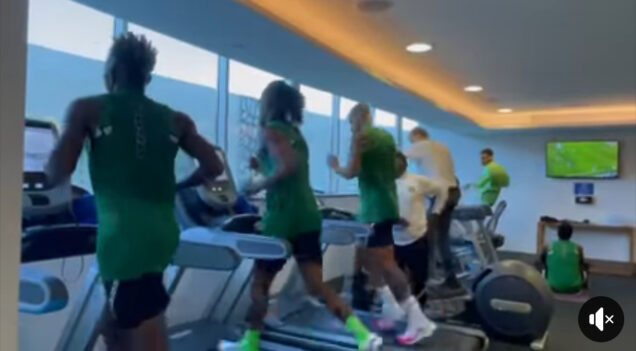 The Super Eagles in a fitness exercise at the hotel gym

The Super Eagles of Nigeria had their first training of the international break on Tuesday at Tangier, Morocco, ahead of their World Cup qualifiers clash against Liberia.

The Communications Department of the Nigeria Football Federation said  all players were at the training except Napoli striker Victor Osimhen, Odion Ighalo and Enyimba goalkeeper John Noble.

They were all yet to arrive at the camp.

According to the team coach, Gernot Rohr the physical fitness training was at the hotel gym.

Similarly, the Liberian national team arrived in Morocco for the game on Monday.

President, Liberia Football Association, Mustapha Raji, in a chat with Spoon Network, said Morocco was selected as an alternative home venue because of the minimum cost attached and the cordiality between the LFA and the Royal Morocco Football Federation.

The Eagles would hope to defeat Liberia to solidify their spot as number one in group C and boost their qualification chances.

Both teams would clash on Saturday at the 45,000-seater Grand Stade de Tanger in Morocco, Liberia’s adopted home for their World Cup qualifiers.