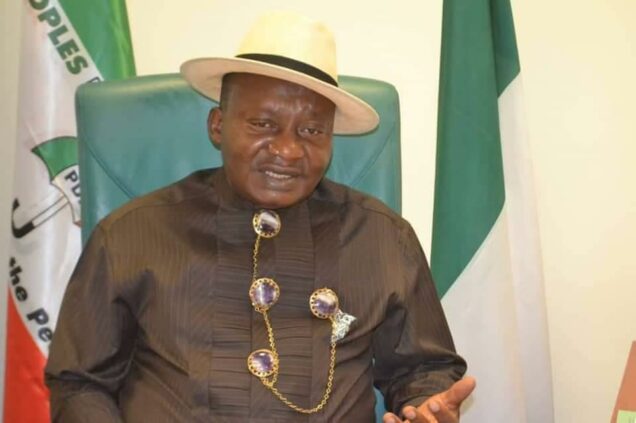 Rt. Hon. Dumnamene Robinson Dekor, member representing Khana/Gokana Federal Constituency in the House of Representatives: supports selection of Gov. Nyesom Wike as the leader of talks between Ogoni people and the FG over OML 11

The Controversy over the selection of Governor Nyesom Wike as the leader of a Stakeholder Consultative Meeting between the Ogoni people and the Federal government over resumption of oil production in Oil Mining License, OML 11 is still raging.

On Wednesday, a federal lawmaker, Dumnamene Robinson Dekor, member representing Khana/Gokana Federal Constituency in the House of Representatives and environmental rights activist, Comrade Celestine Akpobari took diametrically opposing views on the choice of Gov. Wike as the leader of talks with the Federal Government on the oil mining license.

The position of the lawmaker was supported by the State Commissioner for Agriculture, Fred Kpakol while some youth groups back Akpobari.

Dekor, a former deputy Speaker of Rivers House of Assembly dismissed opposition to the choice of Wike as leader of discussion with the FG on OML 11 by Ogoni leaders as “a needless bickering and unwarranted controversy”.

Dekor said Wike as the Chief Security Officer of their states, there is hardly any such high level meeting with the federal government either by existing protocols or laid down tradition without involving the governor.

The lawmaker recalled that former Rivers State Governor, and now Minister of Transportation, Chibuike Rotimi Amaechi and his Minister for Niger Delta Affairs counterpart, Godswill Akpabio among others had been on Ogoni people’s delegation to the Presidency on issues concerning Ogoni ethnic nationality in the past.

He accused members of the All Progressives Congress (APC) of being the architects of the seeming controversy on who should and should not lead the Ogoni delegation to the planned Multi- Stakeholder Consultative Meeting on OML 11.

Dekor described those opposed to the unanimous decision of Ogoni stakeholders that Governor Wike should be at the head of the delegation as enemies of Ogoni people.

The federal lawmaker said the inclusion of the Governor who is the Chief Security Officer of the State is in the interest of the Ogoni people, because it would enhance deeper and meaningful consultation with an impactful and meaningful outcome.

Also,the State Commissioner for Agriculture, Fred Kpakol, said the selection of Wike to lead the Ogoni delegation in a talks with the FG ahead of the planned resumption of oil exploration of OML 11 was because he is by the constitution and laid down tradition the father of all the ethnic nationalities in state.

Our Correspondent recalls that a foremost Ogoni Environmental rights activist, Comrade Celestine Akpobari,and also stalwart of APC had condemned the choice of Governor Wike, citing clash of interest as the Governor had in previous fora said the State Government had acquired 45 percent shares of OML 11.

He argued that since Governor Wike is already an interested party, he cannot lead the Ogoni people in high level consultations with the federal government.

Akpobari also pointed out the Ogoni people have eminently qualified persons knowledgeable in Upstream and Downstream sector of oil Industry.

In same vein,some youths and elders are sharply divided on the adoption of Governor Wike on the matter.

The youths under the auspices of the National Youth Council of Ogoni People (NYCOP) described those seeking Wike’s involvement as betrayers.

The National President of the group, Matthew Dighi, said, “it is a shame that after 26 years of Ken Saro Wiwa’s demise, some Ogoni elites are still working against what the late Environmental rights activist fought and died for.

“All those who want Wike to lead the oil resumption talks with the Federal Government are betrayers and we reject such moves.

“Are they saying we don’t have competent people in Ogoni to negotiate with the federal government without an outsider?

He pointed out that Ogonis have competent sons and daughters in Ogoni both at home and in the Diaspora who know the needs of the Ogoni people better than Wike.

“We will not allow an outsider to negotiate oil resumption for us and we are using this medium to tell our selfish Ogoni elites to jettison any move to involve Wike because we will not allow that to happen,” Dighi said.