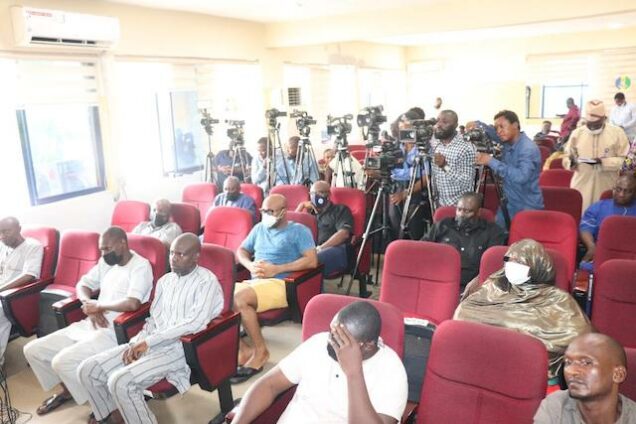 The police have arrested 14 suspects in connection with the raid on Justice Mary Odili’s Maitama residence in Abuja on 29 October.

The arrest comes about 10 days after IGP Usman Alkali Baba ordered a swift probe into the embarrassing incident.

Among the suspects arrested is a fake Chief Superintendent of Police, Lawrence Ajodo; a journalist with one of the national dailies, and an Islamic scholar.

He said the arrest followed a swift investigation by the police.

Nine more suspects linked with the incident including two military personnel are at large, the police spokesman said.

Mba said the suspects are members of a well-organized criminal gang with a web-like involvement of individuals drawing from their different competences, professional background and social contacts in perfecting the criminal plot.

Membership of the syndicate include suspects with background in public service, business, law, journalism, banking, amongst others.

The facts of the case according to Mba:

The facts of the case from Police Investigations have it that one Aliyu Umar Ibrahim, an acclaimed whistle blower, following a baseless and unverified information he got from one Yusuf Adamu – parading himself as the godson of Chief Peter Odili – that there is a huge sum of money in foreign currencies stashed in the residence of Her Lordship, Justice Mary Odili located at No. 7, Imo River Street, Maitama, initiated processes aimed at illegally recovering the said money.

Consequently, the syndicate contacted one Bashir Musa, a clerical staff of the Central Bank of Nigeria (CBN), who in turn sought the assistance of two (2) others – Shehu Jibo and Abdullahi Adamu.

The whistleblower was later introduced to one Bayero Lawal who falsely presented himself as a Director in EFCC. He took the whistle blower to one Hajiya Maimuna Maishanu who in-turn took them to her cousin, Michael Diete-Spiff, who claimed to be the Director of Foreign Currency Operation of Ghost’s Account for Local WhistleBlowers & Assets Recovery Panel, purportedly operating under the Federal Ministry of Justice – an agency that in fact does not exist. Diete-Spiff later introduced the whistleblower to one Lawrence Ajodo with the aid of one Godwin (currently at large).

From this moment, Lawrence Ajodo – who falsely claimed to be a Chief Superintendent of Police (CSP) and also the officer in-charge of a non-existing Asset Recovery Panel at the Federal Ministry of Justice took over the planning and execution of the illicit operation. Through the assistance of one Ayodele Akindipe, an herbalist, the fake CSP procured the services of an Assistant Superintendent of Police and two (2) Soldiers for the failed operation.

The fake CSP also elicited the services of a journalist, one Stanley Nkwazema and two lawyers namely Bar. Alex Onyekuru and Bar. Igwe Ernest. While the journalist was expected to play the blackmail role, the lawyers were expected to help the syndicate in perfecting court documents and processes. The fake CSP later deposed to an affidavit and eventually obtained a search warrant meant for the execution of the raid.

The fake CSP also elicited the services of a journalist, one Stanley Nkwazema and two lawyers namely Bar. Alex Onyekuru and Bar. Igwe Ernest. While the journalist was expected to play the blackmail role, the lawyers were expected to help the syndicate in perfecting court documents and processes. The fake CSP later deposed to an affidavit and eventually obtained a search warrant meant for the execution of the raid.

Investigations so far conducted by the Police show that the suspects criminally trespassed on the residence of Her Lordship but were not allowed to execute the search warrant due to the lawful resistance from Police officers on guard duty at her residence.

Police findings also revealed that the principal suspect – Lawrence Ajodo – is an impostor and not a police officer as he falsely claimed.

Also, the signature of the Minister of Justice and Attorney General of the Federation, Abubakar Malami (SAN) on the ID card presented by the fake CSP during the raid was forged. The Search Warrant which the suspects procured from a Magistrate Court for purposes of searching the premises of Justice Odili, was also obtained under false representation. The entire criminal operation has no authorization of any known Security Agency or Federal Government Ministry/Department.

Three (3) vehicles used by the suspects for the illegal invasion and a laptop computer, printer and flash drive used for the production of the fake ID cards were recovered from the suspects by the Police investigators.

Meanwhile, investigation is being intensified to arrest the other seven suspects including two persons believed to be personnel of the Nigeria Army who were physically present during the raid, and fully dressed in Army uniform.

The IGP, while assuring diligent prosecution of the suspects, reiterated the commitment of the Force to continue to advance the rule of law and combatting all forms of crimes and criminality in the country.

After several days of reticence, the Inspector General of Police ordered on 1 November detailed investigations into the reported invasion.

The IGP, who noted that the leadership of the Force was not aware and did not at any time order Police operatives to carry out such assignment, described the reported violation of the sanctity of the residence of the Justice of the Supreme Court as unfortunate and unacceptable.

The IGP directed the Force Intelligence Bureau (FIB) to conduct a discrete investigation into the incident. He assured the commitment of the Force to the safety and security of the members of the Judiciary and Nigerians in general.

He further called for calm, promising that the Force will do all within its powers to unravel the perpetrators and motives behind the breach with a view to bringing all indicted persons to book.

He directed the Commissioner of Police, Federal Capital Territory (FCT) to strengthen security around the street and residence of Justice Mary Odili to ensure her safety and also to prevent a reoccurrence of the unfortunate incident.