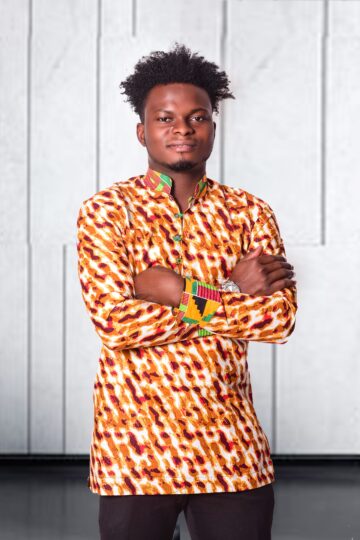 Jeremiah Thoronka, a 21-year-old Sierra Leonean student, who invented a device that uses kinetic energy from traffic and pedestrians to generate clean power, has won the 2021 Chegg.org Global Student Prize.

The prize is worth $100,000. This year also saw US teacher Keishia Thorpe named as the winner of the 2021 Global Teacher Prize.

Thoronka, is the first winner of this prize, which is awarded to an exceptional student who has made a real impact on learning, on the lives of their peers and on society. He was selected from over 3, 500 nominations and applications from 94 countries across the globe

Actor and humanitarian Hugh Jackman announced Thoronka as the winner of the inaugural prize at a virtual ceremony that took place at UNESCO’s headquarters in Paris.

“Students everywhere are fighting for their very future. They are part of a generation that are on the frontline of the greatest challenges of our time – from climate change to global inequality. So, we must listen to their voices and shine a light on their stories,” he said.

Congratulating Thoronka, he also said: “You have made an enormous difference to your community and far beyond. I am sure that you will now use this incredible platform to make an even bigger impact.”

Dan Rosensweig, CEO & President of Chegg, said: “My warmest congratulations to Jeremiah. His inspirational work in pioneering clean, affordable energy makes him a thoroughly deserving winner of the inaugural Chegg.org Global Student Prize. This prize honors students everywhere. While many stakeholders are busy debating, students like Jeremiah are busy doing. They truly are the change makers our world needs.

“And congratulations to Keishia for her incredible work in opening up access to college education for low-income, first-generation American, immigrant and refugee students.”

Congratulating Thoronka for becoming the first ever winner of the Chegg.org Global Student Prize and to Keishia for winning the 2021 Global Teacher Prize, Sunny Varkey, Founder of the Varkey Foundation, said “their incredible stories show the vital role education plays in tackling the great challenges of today and tomorrow.”

Stefania Giannini, Assistant Director-General for Education at UNESCO, while also congratulating Thoronka and Keisha, averred that UNESCO was proud to host this year’s Global Teacher Prize ceremony at its headquarters in Paris. “Inspirational teachers and extraordinary students alike deserve recognition for their commitment to education amid the learning crisis we see today. Now more than ever, we must honor and support our teachers and students as they look to rebuild a better world in the wake of COVID,” she said.

The Varkey Foundation launched the Chegg.org Global Student Prize, a sister award to its $1 million Global Teacher Prize, earlier this year to create a powerful new platform that shines light on the efforts of extraordinary students across the globe who are reshaping our world for the better.

The prize is open to students at least 16 years old and enrolled in an academic institution or training and skills program. Part time students as well as those enrolled in online courses are also eligible for the prize.

Thoronka’s story is quite an interesting one. He was born amid heavy fighting in the Sierra Leone civil war and grew up with his single mother in a slum camp for displaced people on the outskirts of Freetown, having to burn charcoal and wood for lighting and heating.

He saw how, in addition to the photo-chemical smog making respiratory problems commonplace, his young contemporaries lagged behind in their schoolwork because of lack of decent lighting.

Energy poverty is a major issue in Sierra Leone – with only 26% of the population having access to electricity. In rural parts of the country, only 6% have electricity access, with most turning to solar lanterns and dry-cell batteries.

As a result, it has led to the destruction of forests as people chop down trees for firewood, which leaves Sierra Leone highly vulnerable to natural disasters such as flooding and landslides. The reliance of families on firewood and cheap kerosene generators also lead to frequent house fires.

These life-threatening disadvantages and hardships fuelled Thoronka’s passion for renewable energy and climate change advocacy. At 17, when studying at the African Leadership University in Rwanda, he launched a start-up called Optim Energy that transforms vibrations from vehicles and pedestrian footfall on roads into an electric current.

This is different from established renewable energy sources such as wind or solar because it generates power without relying on changeable weather. At the same time, no battery and electrical connection to an external power source is needed.

Optim Energy ran a successful pilot program in Thoronka’s neighbourhoods, Makawo in the northern part of Sierra Leone and Kuntoluh east of Freetown. With just two devices, the start-up provided free electricity to 150 households comprising around 1,500 citizens, as well as 15 schools where more than 9,000 students attend.

Thoronka is currently developing plans to expand into the healthcare sector, which needs power to chill medicines and vaccines and create sufficient light for treating patients after dark.

Thoronka is also one of the World Wildlife Fund’s top 100 Young African Conservation Leaders. He plans to use the prize money to expand Optim Energy to reach 100,000 people by 2030.

The other top 10 finalists for the Global Student Prize 2021 were: Amisa Rashid from Kenya, Ana Julia Monteiro de Carvalho from Brazil, Kehkashan Basu from Canada, Lamya Butt from the UAE, Elliott Lancaster from the UK, Matine Khalighi from the US, Mirko Cazzato from Italy, Oluwadamilola Akintewe from Nigeria and Seema Kumari from India.

Applications and nominations for this year’s Global Student Prize opened on Tuesday 2 February 2021 and closed on Sunday 16 May 2021.

Students who applied for the Global Student Prize were assessed based on their academic achievement, impact on their peers, how they made a difference in their community and beyond, overcame the odds, demonstrate creativity and innovation, and operate as global citizens.

The person nominating the student was asked to write a brief description online explaining why he was nominating the student. He then sent an email letting them know they had been nominated and inviting them to apply for the prize. Applicants were able to apply in English, Mandarin, Arabic, French, Spanish, Portuguese and Russian. To join the conversation online follow @TeacherPrize and @cheggdotorg