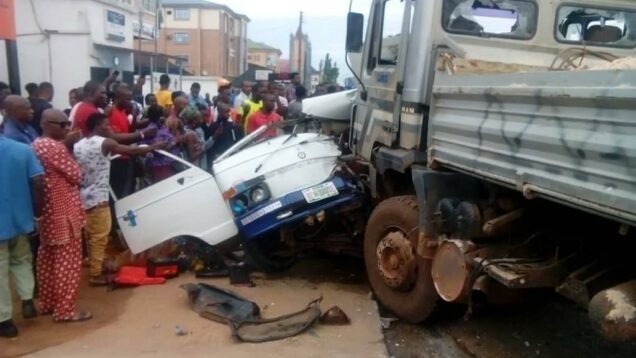 A Thursday accident in Bauchi, involving a tricycle and a bus, took the lives of five persons.

Three other persons sustained serious injuries as the tricycle had a head-on collision with the bus.

Sector Commander of the FRSC in Bauchi State, Yusuf Abdullahi, on Friday said that the accident occurred at Gubi village on the Bauchi-Kano Road.

Abdullahi attributed the cause of the crash to speed violations and overloading.

“Eighteen persons, all male, were involved in the crash, but 10 of them escaped unhurt,’’ he said.

He said the dead and the injured were taken to the Abubakar Tafawa Balewa University Teaching Hospital, Bauchi.

Abdullahi advised motorists to always be conscious of road traffic rules and regulations as well as weather conditions at all times.

It was the second auto crash in Bauchi State that took lives in 24 hours.

On Wednesday, five persons were also killed while nine others were seriously injured in a road crash at Nabordo community on the Toro-Bauchi Highway.