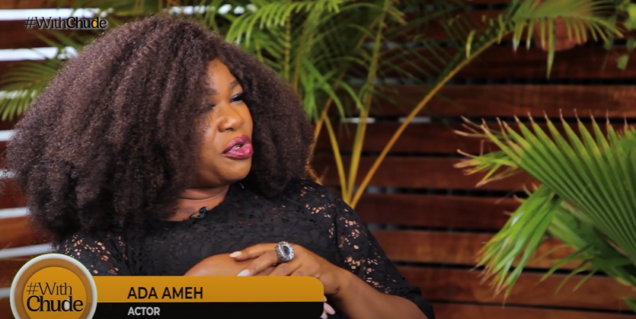 Award-winning actress, Ada Ameh, has opened up to host Chude Jideonwo about her life’s journey, discussing her career, early motherhood, and her daughter’s death.

Known for her excellent interpretation of scripts and her roles in movies and TV shows such as The Johnsons, My Village People, Domitilla, Phone Swap, and recently Olutore, the actor spoke excitedly to host Chude about recent projects like Oloture and a comedy skit with MClively, exuding gratitude and love for life and her craft.

Sadly, 2020 was a hard year for the actress as she lost her only daughter on the 20th of October. Commenting on her loss, the actor confessed that life and work has never been the same since her child’s death.

She said: “I am just trying to get myself now. She is, she was, that one that could look me in the eyes and tell me the way it is without mincing words, my cheerleader, my gossip partner, my best friend”.

Regarding Oloture, she said: “I was very happy to speak in my native dialect which is Idoma”.

The actress also spoke about being a fangirl of love and dating in the industry.

When asked about the picture of her lover posted by her on her Instagram, she said: “We have been dating for six years. I love this man, and I am not pretending about it, and I think he loves me too”.

After twenty-five years, Ada Ameh has continued to enjoy a successful career, gracefully leaping through hurdles, and she attributes this to God’s love and grace on her.

“The only jazz that made me be here today is God”, she says.