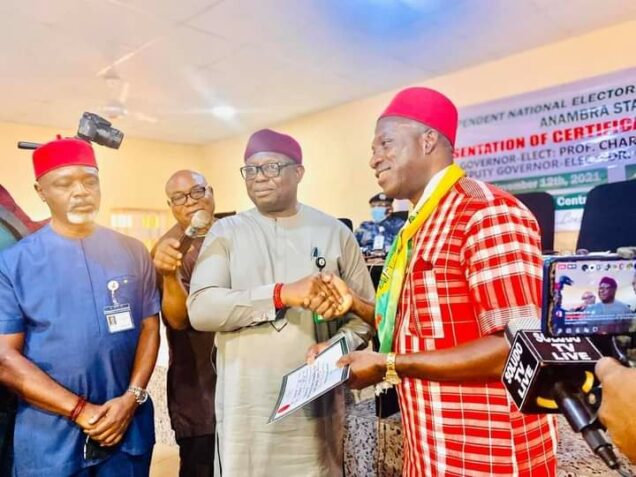 Professor Charles Chukwuma Soludo, the Governor-elect of Anambra State, today, 12 November 2021, received his certificate of return from the Independent National Electoral Commission (INEC).
Signed by its Mahmoud Yakubu the document was presented to Soludo by the INEC Federal Commissioner on Voter Education, Festus Okoye.

The event took place at INEC headquarters in Awka, the Anambra State capital.

Soludo, candidate of All Progressives Grand Alliance (APGA) was declared winner of the 6 November governorship election by INEC. That was after a supplementary election was held in Ihiala local government area of the State on Tuesday.

When he received the document, Soludo thanked God, and the people of Anambra State for the victory.

He said with eclat: “I have just received my certificate of return from the Independent National Electoral Commission (INEC). Thank you Nd? Anambra for the overwhelming support.

“This divine mandate shall be deployed for the good of the Anambra public and humanity at large,” Soludo said shortly after receiving the certificate of return.”