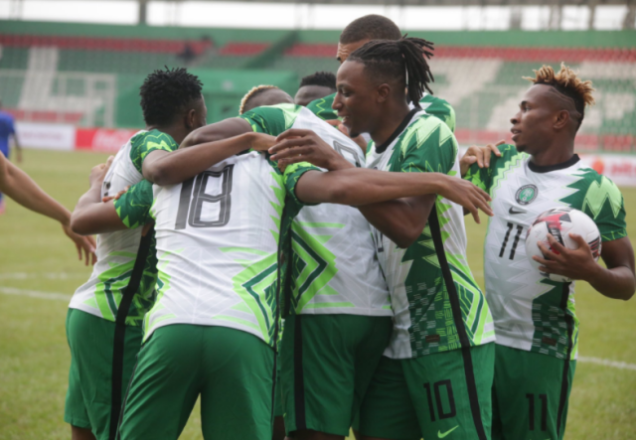 Super Eagles fly over over Liberia in World Cup qualifier

The Super Eagles of Nigeria are a step away from qualifying for the World Cup play-off as they beat the Lone Stars of Liberia 2-0 on Saturday in Morocco.

The two goals were from the penalty spots.

Victor Osimhen scored the first goal for Nigeria on 15 minutes after the Liberian goalkeeper brought him down.

He stepped up and converted the resulting penalty to give the Super Eagles an early lead.

The Eagles dominated play but they could not add another goal in the first half.

The second half went the same way as the Nigerian side dominated possession.

The Eagles striker sent the Liberian goalkeeper the wrong way to give Nigeria 2-0 victory.

The Eagles will need at least a draw in their last match against Cape Verde on Tuesday at the Teslim Balogun Stadium, Lagos, Nigeria to qualify for the World Cup play-off.

Cape Verde defeated Central African Republic 2-1 to remain second in Group C and will need to beat Nigeria on Tuesday to go through.