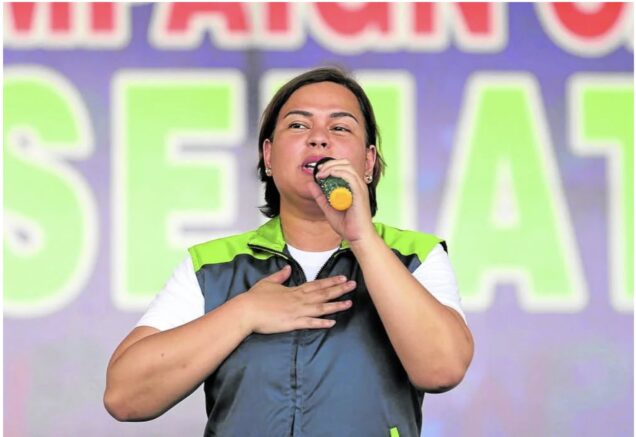 Philippines’ Davao City Mayor Sara Duterte-Carpio finally made her political plans known Saturday as she filed her certificate of candidacy (COC) for vice president under Lakas-CMD.

She had previously quit her reelection bid as mayor and also resigned from her regional party.

Her moves fuelled speculations she wanted to run for presidency and succeed her father, Rodrigo Duterte.

Duterte-Carpio filed her COC as a substitute for Lakas-CMD’s Lyle Uy, according to the Commission on Elections (Comelec), reports inquirer.net.

Lawyer Reynold Munsayac filed her candidacy, two days before the deadline for substitution of election aspirants on November 15.

Duterte-Carpio’s filing for vice president comes after her COC withdrawal for reelection as Davao City mayor on Tuesday and resignation from her regional party Hugpong ng Pagbabago on Thursday, which further fueled speculation that she will vie for a national post.

Just hours after quitting HNP, the presidential daughter then took her oath as member of the Lakas-CMD before House Majority Leader Martin Romualdez, the president of the party, at the Revilla Farm in Silang, Cavite.

Duterte-Carpio has led previous surveys as a possible presidential candidate in the 2022 polls. But she had repeatedly said that she will not seek the top government post.