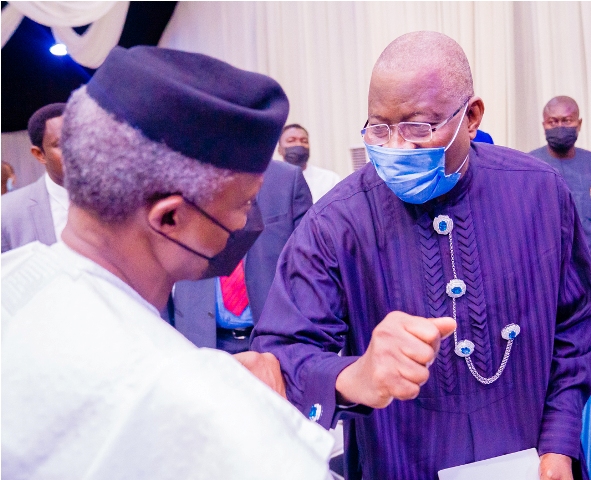 Osinbajo and Jonathan at a event

Dr Goodluck Jonathan, former President of Nigeria, is among prominent Nigerians that will receive the Zik Leadership Merit Award on Nov. 16.

Onyeke said the event, scheduled to hold at Shehu Musa Yar’udua Centre, Abuja, was to recognise the outstanding contributions of some prominent Nigerians to the country and humanity.

According to him, others that will receive the award include, Brig-Gen Buba Marwa (rtd), the Director-General of the National Drug Law Enforcement Agency (NDLEA), Sen Rochas Okorocha, former governor of Imo State, and Senator representing Imo West Senatorial District.

Onyeke also disclosed that Vice-President Yemi Osinbajo would be the Chief Guest of Honour, while Alhaji Yahaya Abubakar, the Etsu Nupe, would chairman the occasion.

He said the 2nd annual INUF leadership award with the theme “Preserving Zik’s Legacies for National Unity”, was aimed at honouring the late Dr Nnamdi Azikiwe, the first President of Nigeria, who believed in the national unity of the country till his death.

The DG said that INUF, as a non-political organisation with membership from the six Local Government Areas (LGAs) that made up Enugu North Senatorial District, would continue to celebrate Zik because of the special love he had for the Nsukka people

“Not only that late Zik lived part of his life at Onuiyi Nsukka In Nsukka LGA, but he sited the first indigenous and prestigious university of the country, University of Nigeria Nsukka, to demonstrate the love and care he has for Nsukka people.

“UNN has put Nsukka on the world map, as well as has made the town to become a household name globally.

“Nsukka people will continue to celebrate and honour the late nationalist and first President of Nigeria, popularly known as Zik of Africa,” Onyeke said.