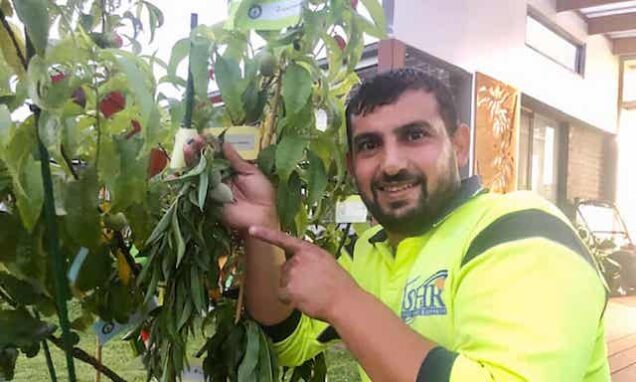 A tree in Australia bearing 10 different fruits has just claimed a Guinness world record for most types of fruit on a single tree.

The tree is the result of a decade of Hussam Saraf’s hard work, transforming his modest stretch of grass in regional Victoria into a tropical oasis bearing rare fruit trees and edible natives.

“The previous record was five fruits grafted onto one tree, so I decided to graft 10,” Hussam said in a report by The Guardian

The previous record of five grafted fruits – apricot, cherry, nectarine, plum and peach – had been held by Luis H Carrasco of Chile for two decades.

Hussam’s initial application, for grafting white and yellow nectarines, white and yellow peaches, blood and yellow plums, peachcots, apricots, almonds and cherries was deemed to only represent five types of fruit, placing him at a tie with Carrasco.

“I told them he had nectarine and peach which they counted as two, when it should have been one. So they said OK, changed the previous guy to four, and me to five,” Hussam said.

“I said OK, I’m happy, it’s amazing. Sometimes you just need to have a conversation.”

Hussam told Guinness World Records his tree provided a message of “peaceful coexistence”; the colours, shapes and different leaves and fruits on the branches of his creation a metaphor for diverse society, respect and acceptance.

The process of grafting is at once simple and complex – Hussam’s tree started as a nectarine tree from seed, which was gradually expanded by grafting the branches of other trees together from their sides.

“Every branch is a unique tree by itself,” he said.

Hussam arrived in Australia in 2009 from Iraq. Throughout his childhood, gardening was a regular part of high school, where students learned singular grafting with figs.

In the school holidays, Hussam would spend three months at his grandparent’s farm where dates, figs, citrus and pomegranate were fragrant and abundant, and his passion for gardening grew.

Since moving to Shepparton, Hussam has become a multicultural officer at the city’s major public school – a recent merger of four high schools in the area.

“The kids are excited, they’ve followed it on Instagram … the young generation is all on Insta,” he says.

“I wanted to give them an example to aim high. Don’t say it’s too hard; you can do it if you put in the hard work and have a target. Never say ‘I can’t do it’.

“I hope people will come from Bendigo, Melbourne, interstate just to see the tree. To have something big like this recognised by the Guinness World Records, it’ll bring money to the town … and I wanted to prove I could do it.”

Still, Hussam isn’t satisfied with one record. He currently has two further records pending – the most variety of stone fruits on one tree, and the tree with the most apple fruits.

He also plans to enter the record for the longest lily flower, which usually grow between 40 and 80 cm.

The crowning glory, though, when Covid restrictions ease, would be to beat the record for the largest gardening lesson.

“I’ll need the help of the community for that one,” Hussam says.