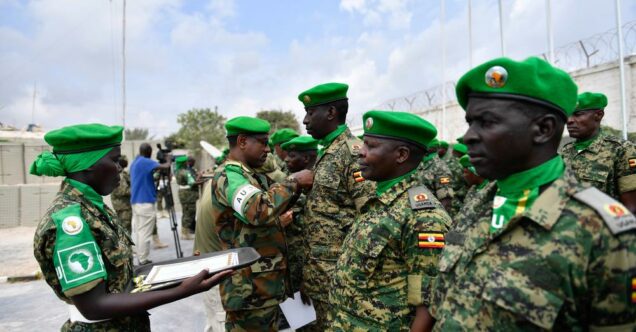 Two Ugandan soldiers accused of killing seven Somali civilians in August while serving under the African Union peacekeeping mission (AMISOM) have been sentenced to death by a court martial.

Three others were sentenced to 39 years each in jail after being found guilty.

AMISOM said the Court Martial which sat from November 1-12 in the Somali capital Mogadishu, reviewed all the facts including witness statements and found the soldiers guilty of killing the civilians in Goloweyn on August 10.

The AU mission said in a statement issued on Saturday evening that the five will be repatriated from Somalia to Uganda to serve their sentences.

“As soldiers, we have a responsibility to protect lives and property. Our mission in Somalia is to degrade al-Shabab and other armed groups.

“In doing so, we absolutely have every responsibility to protect the civilian population, and this is very clear in our Rules of Engagement,” Ugandan People Defense Force contingent and AMISOM Sector 1 Commander, Don Nabasa said.

AMISOM had said on August 11 that its forces killed seven al-Shabab terrorists while others sustained injuries during the counter-offensive.

The AU mission said the terrorists were killed after the militants ambushed the Ugandan troops while on a routine patrol to secure the main supply routes between Beldamin-Golweyn forward operating bases in southern Somalia.

However, the residents said the AMISOM forces killed seven civilians and not al-Shabab militants, prompting the AU mission to launch a probe into the incident on Aug. 12.

AMISOM Force Commander Diomede Ndegeya said the AU mission will continue to ensure strict compliance with obligations as they carry on with the task of pursuing and degrading al-Shabab and other armed groups, as well as protecting population centres and securing critical infrastructure and sensitive sites in Somalia.

Francisco Madeira, Special Representative of the Chairperson of the African Union Commission and Head of AMISOM, deeply regretted the killing of the civilians and extended condolences to the bereaved families for the tragic incident.