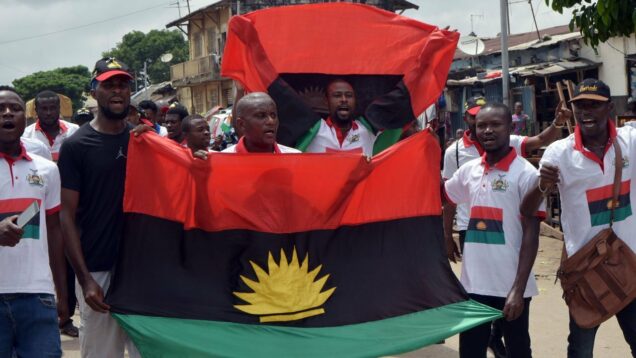 By Abdul Hassan
Alhaji Lawal Usman, a Chieftain of the Peoples Democratic Party (PDP) in Kaduna State, has described Indigenous People of Biafra IPOB as a great joke with members who just want attention from the Federal Government.

Usman who also said the group’s threats to break away from Nigeria, was not real spoke to News Agency of Nigeria (NAN) on Sunday in Zaria

He added that IPOB’s campaign lacked support from the leaders of the South East.

“We have Igbo people living and doing business in all parts of the country, are you saying that this people are ready to fold their businesses and fortunes and just go back empty handed from Nigeria.

“The whole thing about IPOB is a great joke, they just want attention from the Federal Government.

“I don’t take them seriously, left to me, they won’t last more than one week, especially if the government is serious about them.

“There are great people in South East who believe in oneness of Nigeria, I think that IPOB is made up of some trouble makers, making noise trying to seek government attention,” Usman said.

He said that the group had no knowledge of Nigeria’s politics.

“They are young men who have no knowledge of the country’s history, especially the Civil War, I think they needed to be educated on the history of the country, because they are acting blindly.

“They are also seeking for foreign funding from enemies of Nigeria who do not wish the country well,” he said.

“There are Igbo businessmen and women in Kano for example doing business and living peacefully for years and they are not talking of Biafra.

“There are Igbo businessmen in Abuja, in Yola, Kaduna, Sokoto and all-over the North owning property and living like Kings in the areas, they are not talking of Biafra.

“The Anambra election was also held peacefully where people voted for their choice candidates, without thinking of Biafra, ” he said.

Usman advised IPOB to channel it grievances through the South East representatives at the National Assembly rather than engage in violent campaign without results. (NAN)