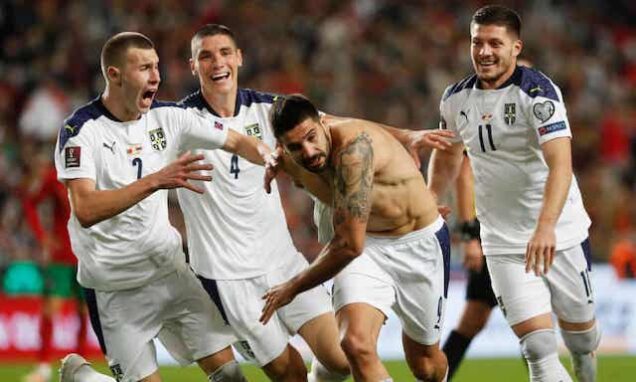 Serbia with a late winner sealed their spot at the 2022 World Cup in Qatar, at the expense of hosts Portugal, now condemned to playoffs.

The late winner via Aleksandar Mitrovic’s header gave the Serbians a 2-1 victory, over Ronaldo’s Portugal in the Group A match in Lisbon.

Ahead of the match, Portugal needed just a draw to book their way to Qatar.

And they appeared on course when they scored first after two minutes.

Bernardo Silva capitalised on a defensive error to set up Renato Sanches, who slotted the ball into the net, leaving the Serbian keeper, Predrag Rajkovic perplexed.

Dusan Tadic’s deflected strike levelled the scores later in the first half.

Portugal’s goalkeeper Rui Patricio had himself to blame by allowing the ball to cross the line.

Substitute Mitrovic completed a dramatic turnaround in the 90th minute as he headed in from Tadic’s cross to send Serbia top of Group A with 20 points and condemn Portugal to the playoffs.