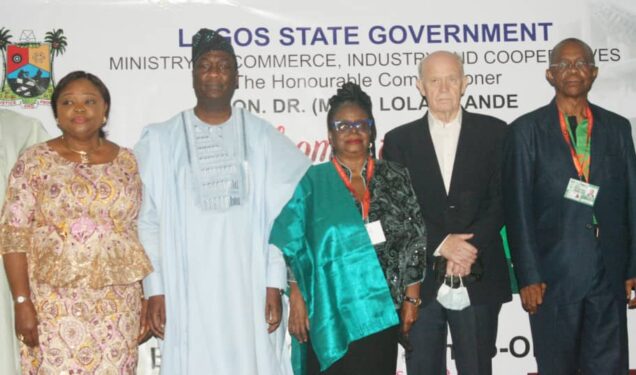 Lagos State Governor, Babajide Olusola Sanwo-Olu has assured members of the business community in the State of the commitment of his administration to improving the business environment towards making it more attractive to investment.

Speaking on Sunday at the Lagos State Day and Closing of the 2021 Lagos International Trade Fair, the Governor who spoke through his deputy, Dr. Kadri Obafemi Hamzat said his administration would continue to place high priority on key infrastructure that would make the state safe, secure, functional and productive as an impetus towards achieving a sustainable economic growth through highly-motivated and vibrant private-sector participation.

The governor stated further that his administration since the inception, has left no one in doubt in its intention to accord the private sector a pride of place in its vision and plan to build a 21st century economy.

He added that government has in the past two years, taken practical steps to translate its intention into concrete actions through various infrastructural projects and business friendly policies which it has continued to implement with the overriding objective of making the environment more conducive for investment to thrive.

Sanwo-Olu disclosed that while some of these ground-breaking projects have been completed and commissioned, some are progressing at an appreciable rate towards completion between next year and first quarter of 2023. The projects which have great multiplier effects on business growth are the Lekki deep sea port project and the Blue Line rail project among others.

He stressed further that his administration have also not relented in its efforts in the areas of ensuring improved power supply and enhanced internet connectivity which is a major component of the smart city project, it has also invested massively in stepping up the capacity of security architecture which has ensured that the State remains one of the safest States in the nation.

Commissioner for Commerce, Industry and Cooperatives, Dr. Lola Akande stated that the Babajide Olusola Sanwo-Olu administration has been taking giant strides in the creation of enabling environment for entrepreneurship development and business prosperity by focusing on development of physical infrastructure and other business support processes to enhance economic competitiveness and productivity of small enterprises in the State.

She further assured that the state government shall not rest on its oars until business prosperity is guaranteed as it is keenly aware that the achievement of becoming Africa’s model megacity by 2025, is hinged on continuous improvement of the business climate to stimulate private sector investments, create jobs and increase productivity in the State.

The Commissioner noted that the participation of the State in the annual Trade Fair affords it the opportunity to accommodate a number of Micro, Small and Medium Scale Enterprises (MSMEs) in the State Pavilion to relieve them of the burden of cost of participation, thereby affording them the opportunity of showcasing their products and services to the public, including the international community.

She added that this is one of the many ways in which the State Government has been promoting and providing networking platform for MSMEs to stimulate demand for their products and services and ultimately facilitate the enhancement of their productivity.

President of the Lagos Chambers of Commerce and Industry, Mrs. Toki Mabogunje while appreciating and commending the resilient and optimism of participants at the fair, said governments at all levels in the nation would continue to address the issue of enabling environment especially as it regards infrastructure, insecurity and the right kind of policies that enable trade.

She added that these are needed in order to fully harness the huge enterprising resources of domestic and foreign investors to the diversification of the economy and welfare of the citizens of the country.

Speaking further, the president applauded the disposition and commitment of Governor Babajide Sanwo-Olu to the promotion of post collaboration between the Lagos State Government and the Organized Private Sector of the State and appreciates his all-inclusive approach to governance.