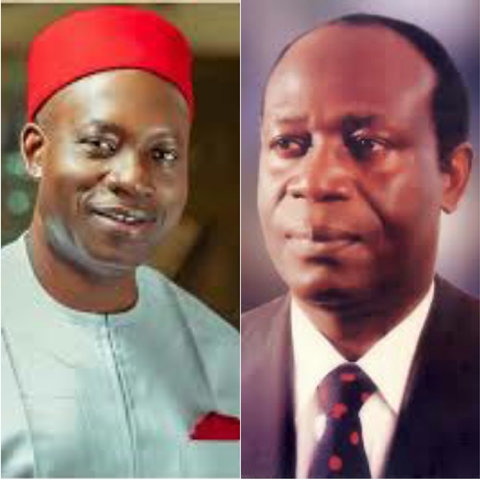 After suffering some technical hitches, the Anambra State Governorship election was concluded on Tuesday, 9th November, in favour of Prof Charles Chukwuma Soludo, candidate of the All Progressives Grand Alliance, APGA. The result posted by the Independent National Electoral Commission, INEC, showed Soludo polled 112,229 votes to defeat his closest rivals, Valentine Ozigbo of the Peoples Democratic Party, PDP, who polled 53,807 and Andy Uba of the All Progressives Congress, APC, who polled 43,285. By the way, Soludo and his two rivals are brothers, from the same axis of the State.

The elect, a Professor of Economics and former Governor of the Central Bank of Nigeria, CBN, 2004-2009 will assume office as Governor on Thursday, 17th March, 2022 when the tenure of incumbent, Dr. Willie Obiano will come to an end.

Soludo will not be the first former CBN Governor to have become the Chief Executive of a state. He shares that admirable feat with late Clement Isong, the Second Republic Governor of old Cross River State. He was the second indigenous CBN Governor, 1967-1975.

While Soludo is poised to assume office as the fifth Governor of Anambra State, Isong was the first democratically elected Governor of old Cross River State, 1979-1983, encompassing today’s Cross River and Akwa Ibom States. The stories of the two in so many ways, read like a reinvention of one, in the other. A mysterious reincarnation of Atunbi (born again) narratives, sort of.

Although the two may not be contemporaneous, having been years apart in their ages and cultures, they were exposed to similar environmental conditions. There is a clear 40 years difference in their ages. Isong was born to Ibiobio parents, Nathaniel and Maggie Isonguyo, on Tuesday, 20th April 1920 in Eket, Akwa Ibom State. On the other hand, Soludo was born on Thursday, 28th July 1860, three months short of Nigeria’s independence to Pa Simeon and Mama Mgbafor in Isuofia village, Aguata Local Government Area, Anambra State.

In spite of these differences however, their lives reflect unique archetypal patterns. Indeed, unknown to many, beyond board room and political pointings, the trajectories of the life of Isong and Soludo boast of other striking similarities. Let’s take a quick inventory of some of them.

*Both were born into poverty and uncertainty. These negative circumstances are heralded in their respective names. For instance, Pa Isonguyo and his wife had given birth to five children, but sadly non survived. Thus, when the sixth came in a pale and fragile looking Clement, they were pessimistic and named him, Nyong, meaning wanderer. It must have been a pleasant surprise to see that he did not only refuse to wander away, but among the most illustrious of his generation. His birth became a door opener. The couple proceeded to have two other children that survived. Of course, Nyong did not join his ancestors until 2000, when he turned an octogenarian.

The same air of uncertainty was conjured about four decades later, when Charles Soludo was born. Unsure of what fate would befall the lad, the parents named him Chukwuma, which means God knows.

*Isong grew up under very difficult conditions. He was at a time left in the custody of a herbalist, who after curing him of his regular spasms converted him to a fisherman. At different times he was also a wood cutter, house boy and petty trader, dealing mainly in cigarettes. He combined all these with schooling.

Soludo was not anything more than a poor village boy who “God gifted and lifted up.” He was also a fetcher of woods in his childhood years.

*Isong’s poor health did not leave much likelihood of success in a world becoming more competitive per time. To make matters worse, his father died when he was in primary II, leaving him at the mercy of the elements.

A similar fate befell Soludo. The mother whose biggest dream was to see the child become like Ugoji, Headmaster of the village school, died in 1968, when Soludo was eight.

*In the midst of the very deprived childhood, both characters had a strong will to survive and deep mental capacity going for them. At the primary, secondary (which he completed at about 18yrs) and the University College, Ibadan where he studied Economics, Isong was an exceptional student. He became a lay preacher and teacher before travelling to the United States, for further studies in Economics and Public Administration.

A note about that overseas trip. The respected historian Prof. Olutayo Adesina in a biography records that on the day Isong left Nigeria for US, his people scooped some sand from his home ground, wrapped and gave him. This was to serve as a reminder that he must return home after his education; and he must not get lost in the traditions of the white man

Despite the vicissitudes of life, Clement earned a PhD from Harvard at 37. This was a rear feat at the time. In fact, at Iowa, he set a record and was later described by the school as being among “the most outstanding African students to have come to the United States…”

Soludo’s academic exploits are not less tingling to the ears. The renowned Economist studied at the University of Nigeria, Nsukka, where he earned his first degree, Master and PhD. He graduated with a First Class and came top of his class in all categories. That is not all.

*Isong worked in the United States for about five years, as a teacher and banker. But he did not ignore memory of the scooped sand. He then returned home to lecture in Ibadan, his former school. The CBN commenced operation in July 1959, with Isong as it’s pioneer Secretary. Political maneuvers saw his redeployment to the International Monetary Fund as an Adviser, but in 1967 destiny compelled the military government to announce his appointment into the number one banking position in the country. He was 47 years old at the time.

Soludo earned his Doctorate at 29, continued lecturing at his Alma mater, where he was appointed Professor at an impressionable age of 38. That was in 1998. He has also worked as a consultant to several international organisations, including the World Bank. He joined the Federal Government in 2003 as an Economic Adviser to former President Olusegun Obasanjo, who later elevated him to the CBN Governorship position, in May 2004. He was yet to turn 44.

*Both men introduced far reaching reforms into the banking industry and the Nigerian economy. Isong, managed the economy during the civil war, presided over the change of Nigeria currency in Jan 1968 and coordinated the post war oil boom. This was the root of his often misunderstood statement, that Nigeria’s problem was not money, but where to invest it. During his tenure Nigeria avoided running up unsupportable debts and amassed fat foreign reserves.

In a similar development, Soludo saw the country through a prosperous era through out of the box fiscal and monetary policies. The bank recapitalisation and debt forgiveness pursuits with foreign creditors were among policies that set the Soludo era apart. It is a strong coincidence that it was during Soludo’s tenure that Isong’s name was immortalised on the N1,000 note, the highest Nigerian currency.

*For their noble contributions to nation building, both men have been given national honours. Isong was awarded Commander of the Order of the Federal Republic, CFR, the third highest honour. Ditto Soludo

*The amiability of their stories is not limited to their public and political careers. Even at the family front, they share certain things in common. Or how does one explain the fact that Isong had six children. Soludo is also blessed with six, including Ozonna a musician, composer and actor.

Talk of an antitype or prototype. Once upon a time, when asked about his unfulfilled dreams, Isong was quoted as saying he had none. His passion was to always be a man in charge. And this, he did. He became a banker—in charge of the nation’s money; he became a teacher—in charge of people’s intellectual growth; and he became a political leader—commanding obedient followership from millions of people. He accomplished all his dreams; at the highest levels possible.

Soludo echoed a related note in one of his recent campaign tours, he said: “I have achieved all I wanted to achieve in the world in my thirties. I have travelled to 45 countries across the six continents as a scholar and consultant.”

Two lives. One, a mirror of the other. The first became State Governor at 59, the second attained that height at 61.