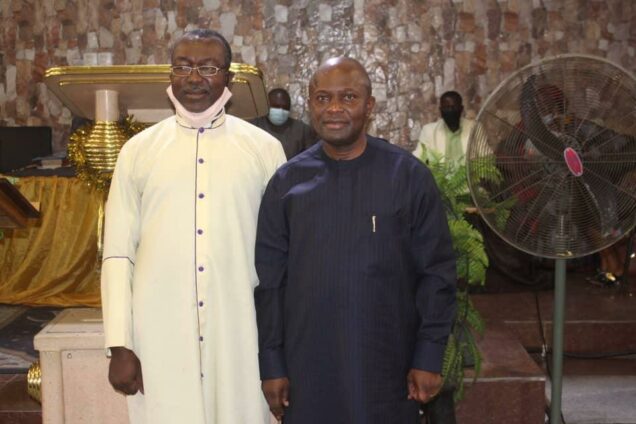 Chief of Staff Government House, Hon. Engr. Emeka Woke (right) with Rev. Sunday Okhifoh(left) during a fundraising service of Church of Christ in Nations, Port Harcourt for purchase of a landed property.

Rivers governor, Nyesom Wike has said that his administration will not relent in its support for the Church to promote and expand the gospel of Jesus Christ even as he said the state is running a ‘Jesus economy.’

Governor Wike, stated this at the special fundraising service for the purchase of landed property by the Church of Christ in Nations, Port Harcourt on Sunday.

Represented by the Chief of Staff, Government House, Chief Emeka Woke, the governor who donated N30m to the church reiterated that his administration’s support for the Church of Christ has never been politically motivated.

In press statement by Kelvin Ebiri, his Special Assistant (Media), Wike, who donated Thirty Million Naira (N30M) to support the Church of Christ in Nations, assured that whenever his administration is called upon to contribute to the propagation and evangelism of the gospel, it will not relent to support the Church.

Wike implored Christians to continue to pray for the success of his administration and the State.

According to him, the prayer of Christians has been a major source of strength of his administration since its inception in 2015.

“Even in governance, we won’t have been able to achieve anything without God. Look at the economy of the country today, but everyday, we are either commissioning or flagging off projects. People ask how do you do this? His Excellency will always say, this State is a Christian State, and this State is running a Jesus economy. In the Jesus economy, you give a little to the work of God and God multiples that little you have given in a million fold. It is with that we are able to execute our projects.”

Wike added that his support for the Church is an altruistic service, rendered in appreciation of God’s benevolence towards his administration and the good people of Rivers State.

“When as a government, we support the work of God, people think that we do that for political reasons.They think maybe we want to get the support of the congregation of that particular ministry, no. We do that as Christians, because we realise the fact that except the God build the city those who labour will labour in vain; and except God watches over the city, the watchmen will only keep awake for nothing.

“Given the circumstance that brought our administration on board, for those of you who live and do business in Rivers State, you know that it was not easy for us to come in. The APC government was already here, and then we came in from Abuja as minister to take over administration of Rivers State as governor.

“For those of you who live and do business here, will also know that the last election in 2019 was also not easy. It was one of the toughest election in the entire Nigeria. It was election between the military and the people of Rivers state.

“And so we know that it is not of him that willeth, nor of him that runneth, but it is only God Almighty who shows mercy. And so we will not forget to thank God, we will not disassociate ourselves from anything that has to do with the work of God and progress of God,” Wike added

The governor thanked God for the successes recorded by the Church of Christ in Nations since its inception. He urged the Church not to relent in its serious commitment to expansion and propagation of the gospel.

The pastor, Rev Sunday Okhifoh said the special fundraising service was organised to solicit support to purchase a landed property which will be used for the propagation of the gospel.

He explained that the first missionaries that came to Africa and Nigeria comprised of pastors, engineers, doctors who not only preached the gospel, but also established schools, hospital and other facilities to take care of their immediate community.

“The gospel is holistic, in the sense that it touches not only the spirit of man, but even physical life of man. It also touches the society to make it a prosperous society, a place where peace, where well being, where progress, where prosperity is affordable and attainable to all. And we will agree that where the Christian message has been accepted and the Christian life is given a free hand to flourish, you will see development and prosperity always come to those places. This has been the work of the Church.”

Rev. Okhifoh said the Church of Christ in Nations intends to build a non-commercial clinic and school in the landed property in Port Harcourt.