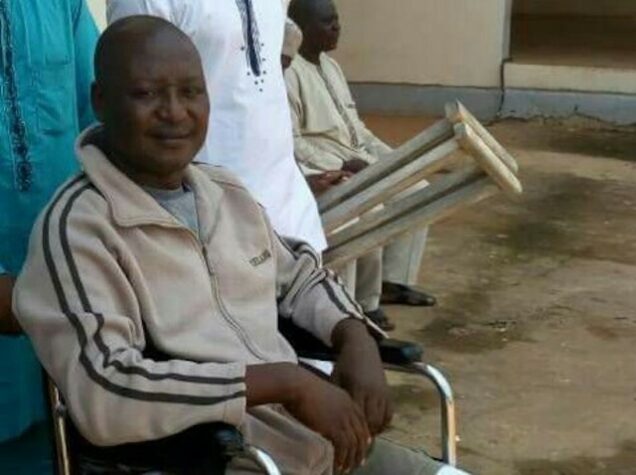 Nigerian authorities should immediately and unconditionally release journalist Luka Binniyat and drop all charges against him, the Committee to Protect Journalists said today.

On November 4, police officers in Barnawa, Kaduna state, arrested Binniyat, a freelance journalist who contributes to the U.S.-based news outlet The Epoch Times, according to an Epoch Times report and Jonathan Asake, president of the Southern Kaduna Peoples Union, a local rights group, who spoke to CPJ in a phone interview.

Binniyat, who also works as a spokesperson for the Southern Kaduna Peoples Union, was arrested at the group’s office in Barnawa, according to those sources.

Officers took Binniyat to the police headquarters in Gabasawa, in northern Kaduna state, where they revealed that he had been arrested in response to a complaint by Samuel Aruwan, the state’s commissioner for internal security and home affairs, over an October 29 report that Binniyat had published in The Epoch Times, according to Asake and that report.

On November 8, police filed charges with a magistrate court under Section 24 (B) of the Cybercrimes Act, and took Binniyat to a local prison, according to Asake and Binniyat’s lawyer, Ehizogie F. Imadomeju, who spoke by phone with CPJ.

On November 9, Binniyat was arraigned and the court denied his bail application, according to Imadomeju and another report by The Epoch Times.

“Disputes over reporting should be settled in ways that avoid the jailing of journalists.”

Section 24 (B) of the Cybercrimes Act, which CPJ reviewed, criminalizes using computers or other devices to transmit information that the sender “knows to be false, for the purpose of causing annoyance, inconvenience, danger, obstruction, insult, injury, criminal intimidation, enmity, hatred, ill will or needless anxiety to another or causes such a message to be sent.”

Imadomeju told CPJ that, if convicted of cyberstalking, Binniyat could face up to three years in prison and a fine of 7 million naira (US$17,049).

The Epoch Times is a U.S.-based international news outlet affiliated with the Falun Gong religious movement; in Nigeria, it covers local news stories and often reports on religious and ethnic minorities.

Binniyat’s October 29 Epoch Times report criticized the Kaduna state government’s response to the killings of Christians, and quoted Senator Danjuma Laah as saying that Aruwan had been involved in concealing facts around a “genocide against Christians in the Southern Kaduna State.”

The report also alleged that police had failed to make arrests one month after 38 unarmed farmers were killed in Madamai, a predominantly Christian community.

Aruwan told CPJ over the phone that the comments attributed to Laah were false and that they had put him and his family in grave danger.

Also reached by phone, Alfred Borg Audu, Laah’s special adviser on intergovernmental affairs, denied that Laah had made those comments.

Asake told CPJ that Binniyat was denied bail because the judge said that the court did not have jurisdiction over the matter, and then adjourned proceedings until November 23, when they are scheduled to be heard again by the same court.

Doug Burton, a freelance editor for The Epoch Times who worked with Binniyat on the October 29 story, told CPJ by phone that Binniyat wrote the report in his capacity as reporter for the news outlet, not as a spokesperson for the Southern Kaduna Peoples Union.

CPJ called and texted Kaduna state police spokesperson Mohammed Jalige for comment, but did not receive any replies.

Previously, authorities detained Binniyat in 2017 for alleged breach of peace and false reporting over a report he wrote for the Vanguard news website, as CPJ documented at the time.