Wike boasts: All those who plotted against me have failed 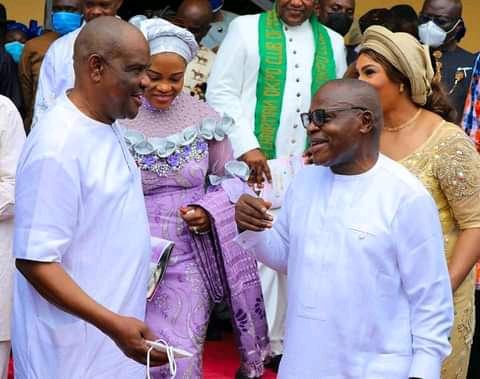 Rivers governor, Nyesom Wike has declared victory over all those he said plotted his downfall in his party, the Peoples Democratic Party, PDP and his administration.

According to him, the recent crises that were stirred within the PDP were spearheaded by people who, in secret meetings, plotted to bring him down.

But he declared that all those involved in the plot are now out of their various positions, according to a statement iss issued by Kelvin Ebiri, his Special Assistant.

Wike was quoted as saying that “Recently, you heard there was some crises in the Peoples Democratic Party (PDP). Everybody who was involved, that plotted everything for my downfall, all are out. Everyone, that slept, that went to a meeting, planning how they’re going to bring me down, not one survived.”

The governor also alluded that similar plot was contrived when the former Chief Judge of the State, Justice Adama Iyayi-Lamikanra was to be appointed, but the plot also failed no matter how hard they tried.

He wondered why somebody would render services for the interest of Rivers State and when it is time for appointment, people started to conspire and even tried plotting against his government.

“When your predecessor, (Justice Iyayi-Lamikanra) was appointed, you have said here that people came to you to say she’s not from Rivers State. Such people are enemies of the State. That is why this country cannot move forward.

“Somebody who has put his or her life serving the State all through her career, making sure that the State moves forward, and at the time of benefits, you now say the person is not from your State. But all the services rendered was for the interest of your State.

The governor explained that when Justice Iche Ndu retired as the Chief Judge of the State, the judiciary was plunged into crisis, resulting in the shutting down of the court for some years. According to him, even when the State did not have a substantive Chief Judge, billions of Naira were signed off steadily in the State judiciary.

According to him, reports of the committee that was set up by the Judicial Service Commission (JSC) indicted some principal judicial staff, some of who were eventually promised to be shielded by somebody who had hoped to become a Chief Judge.

“And so the Judicial Service Commission (JSC) has to set up a committee to investigate it because there was no Chief Judge, but look at the record, billions are being spent. Who is responsible of this expenditure?

“You can’t believe it, some registrars were using that opportunity to make money. You can’t believe the kind of houses people at that level could will build within that period, and they were found guilty.

Governor Wike said it is not out of place for the Ikwerres to stand always with the Odilis because of his love for them since one good turn deserves another.

Governor Wike enjoined the Chief Judge to be diligent in his duties, assertive in achieving results, utilise money meant for the judiciary judiciously and desist being vindictive.

In his speech, Justice Simeon Chibuzor Amadi acknowledged that only God deserves all the thanks for his benevolence over his life, and his appointment as Chief Judge.

He noted that God uses men to accomplish his will and Governor Wike was God’s instrument to make that appointment possible.

In his sermon at the service, Archbishop of the Province of Niger Delta and Bishop of the Anglican Diocese of Ikwerre, Most Rev. Blessing Enyindah said it is only God who can raise any person from obscurity to prominence.

He stressed that God expects those who have so enjoyed His grace and mercies in areas of good health, business successes and promotion to gladly acknowledge it by returning to thank him.

Archbishop Enyindah enjoined the Justice Amadi who God has raised among other judges to become the Chief Judge of Rivers State, to not only thank God in the church as he has returned to do but be determined to continually discharge his duties conscientiously and give justice to the people.