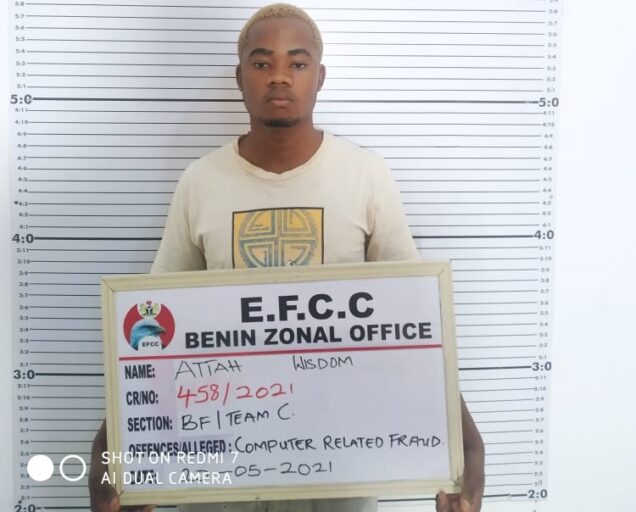 The Economic and Financial Crimes Commission, EFCC, Benin Zonal Command on Monday, November 15, 2021, secured the conviction of Edogbogho Onosemudiana and Wisdom Attah on one count charge of fraudulent impersonation.

The EFCC arraigned the Onosemudiana and Attah before Justice (Prof) Chuka Obiozor of the Federal High Court sitting in Benin City, Edo State.

Both were convicted for fraudulent impersonation and intent to obtain by false pretences.

Attah and Onosemudiana were said to have sometime in April 2021 impersonated the identities of foreign nationals to defraud the unsuspecting victims.

The charge against Attah reads: “that you Wisdom Attah (m) sometime in April 2021 in Benin City, Edo State within the jurisdiction of this Honourable Court did fraudulently impersonate the identity of Michael Scott with the intent to obtain money and thereby committed an offence contrary to Section 22(2) (b) (ii) of the Cybercrime (Prohibition, Prevention, Etc) Act 2015 and punishable under Section 22(2)(b)(IV) of the same Act.”

The defendants pleaded guilty to the charges when they were read to them.

In view of their plea, the prosecution counsel, I.K. Agwai prayed the court to convict and sentence the defendants.

However, the defence counsel pleaded with the court to temper justice with mercy as he claimed that the defendants have become remorseful.

The Judge also ruled that items recovered from them during investigations which include iPhone 8 (golden colour), iPhone 11 pro, SPS laptop and the credit balance of N700,000 domiciled in Zenith bank account belonging to Edogbogho Onosemudiana be forfeited to the Federal government of Nigeria