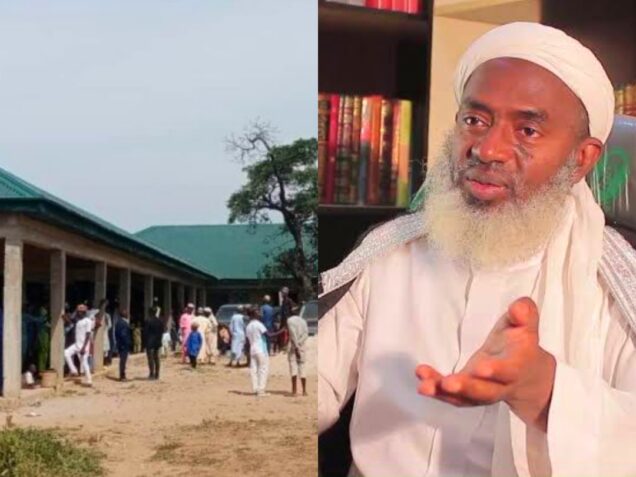 Gumi, while on inspection of the school on Monday, said it was built to educate herdsmen and curb their violent ideologies.

He added that if such a center is replicated everywhere, Nigerians will live in peace.

“Instead of spending billions on military hardware to fight the bandits, Nigeria should spend such money on schools and teachers. I have spoken with the bandits and they have expressed willingness to drop their arms and embrace peace if their children can be given education and other social amenities.

“What motivated me to start this project was to solve the insecurity problem we have from the root because every crime has its perpetrators and perpetrators are drawn from a pool so we want to go there and dry the pool and we found out that education is the best cure.

“If they are educated, they will not be doing what they are doing. So, we say we must take education to the grassroots and we embarked on the project to also be an example for others, local government, state and federal and rich individuals even cooperative societies to come together and make sure that we are directed across the forest to know what we can do to carter for nomads; it does not cost much, very little and it will help to educate them and we will live peacefully with them.

“What we have here is a center containing six classrooms that can be used for primary, secondary schools and at various times you can teach all categories at all times and the place will be engaged for 24 hours because the herdsmen usually take their cattle out by 10 am and bring them back by dawn or sunset so they have 2 hours before they take their cattle away and we have 2 to 3 hours because we like to put some solar light so that they can read 8, 9, 10 in the night so that the herder can go and come back.

“We have schools, we have hospital and also showing them how to grind the foliage which they can use to feed their animals, some of them don’t need to go out because those things are so cheap and farmers are throwing those things away, soon farmers will start charging for it. If we can duplicate this everywhere Nigerians will live in peace.”

Gumi, however, denied saying Nigeria will cease to exist if bandits are declared terrorists.

He said, “It is a quotation out of context, I didn’t say there will be no Nigeria, I said if banditry now has turned into terrorism, fanatical religious terrorism which is there because Islam recognizes religious terrorism so if we allow the herdsmen to turn into a religious fanatic and extremist it will not be good for us as a nation.”

“99% of the herdsmen are not into banditry but if you turn it into religious struggle they will just go there committing crimes, so it is not good to label them as terrorist because it will profile all herdsmen as terrorists because you are attaching it to herdsmen, you are not attaching it to an organization and if you say herdsmen are terrorist Nigeria will have a problem, the whole course will be on fire, the north-south and east will be on fire and nothing will remain of Nigeria if everywhere is on fire”.

“There is a lot that can be done to improve insecurity in Nigeria such as having this kind of center instead of spending billions on hardware, let’s spend it on schools and teachers even the bandits I have spoken with them as I’m speaking with you to drop down their weapons to study, so long their women and children will learn they are ready to drop their weapons, so why won’t we embrace peace?”

Gumi, however, called on the three tiers of government to come and partner on training the herdsmen on how they can be economically viable.

“We want Nigerians to know that the herdsman is the most peaceful. For those that have used banditry and criminality to express their grievances, we want them to know that there is another way. We call on the three tiers of government, corporate organizations, and public-spirited individuals to support in bringing development to the grassroots,” he said.