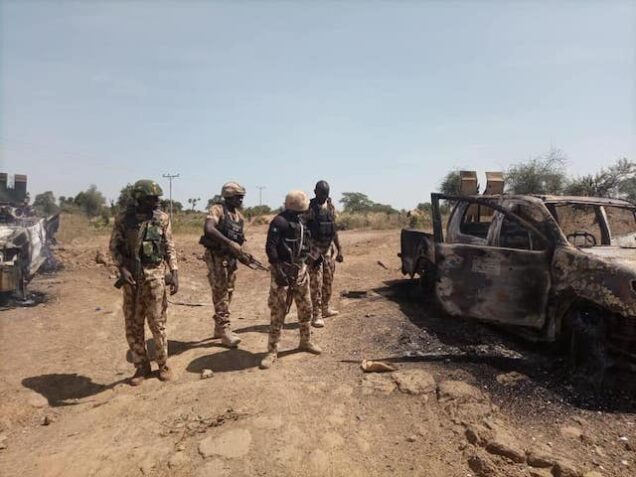 ISWAP vehicles destroyed in the offensive on Sunday in Askira Uba

The Nigerian Military has slammed a curfew on Askira Uba and its environs as troops repelled another ISWAP attack in a village.

After being decimated in an offensive on Sunday, the ISWAP rump launched an attack on the village of Dille.

It was swiftly repelled by the combined efforts of Air Taskforce and ground troops, PR Nigeria reported.

Dille is a village in Lassa under Askira Uba.

“We got intelligence that ISWAP Fighters were moving towards a bridge East of Wamdeo and Roumirgou villages in Askira Uba Province.

“We repelled their attempt today at a remote village called Dille under Lassa.

” We are not taking chances as we are in combat-ready to deal with them,” a military source told PR Nigeria.

They also destroyed the combat equipment in a fierce counter offensive in Askira Uba Local Government Area of Borno State.

He said the 115 Task Force Battalion had an encounter with ISWAP terrorists in Askira Uba on 13 November 2021, during which the troops aggressively defended their location and followed up with a ferocious counter attack.

“Unfortunately, the Commander 28 Task Force Brigade along side three of his soldiers paid the supreme price, as they reinforced troops to defend the location.

“While the battle raged, the gallant troops of 25 Task Force Brigade, supported by Air Component of OPHK engaged the terrorists in a hot pursuit.

‘Troops made contact with the fleeing terrorists at Leho village within Askira Uba LGA and in the encounter that ensued, troops eliminated scores of terrorists and destroyed their combat equipment.

“Relatedly, troops of 115 Task Force Battalion conducted a dawn exploitation towards Leho village and environs, where they discovered 3 corpses of the fleeing terrorists and also recovered 2,560 rounds of 7.62mm Special and 29 rounds of 7.62mm NATO ammunition abandoned by the terrorists.

“In a separate operation, troops have also recovered one AK 47 rifle and uncovered an Improvised Explosive Device (IED) during a patrol in Karawa village and Baga Fish Dam area respectively.

“The IED has been safely detonated by a team of the Explosive Ordnance Disposal unit,” Nwachukwu said.