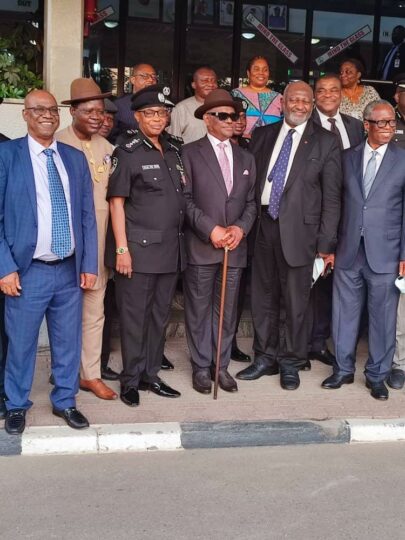 The Inspector General of Police (IGP), Usman Alkali Baba said police had interviewed the Attorney General of the Federal and Minister of Justice, Abubakar Malami as part of the bid to unravel the motive behind the recent invasion of the residence of Justice of the Supreme Court, Justice Mary Odili.

However, he said the Magistrate who issued the search warrant was not released to the police by the Chief Registrar of the Federal Capital Territory (FCT), but instead his statement was submitted.

IGP Baba spoke when he received a delegation for Rivers State led by Governor Wike, at the Force Headquarters, Abuja on Tuesday.

He, however, said all the suspects arrested over the invasion of Justice Mary Odili’s residence are still in Police custody amid ongoing investigation.

“We wrote a letter to the Chief Registrar of FCT to release the magistrate, and instead of releasing him, they replied our letter, plus his statement to us. So, we don’t want to pick any quarrel. What we needed was the statement. We are working with the statement. He has not denied the fact that he has issued a search warrant and that is what we wanted to confirm.”

The IGP, said based on the statement of one of the suspects and a fake Chief Superintendent of Police, Lawrence Ajodo statement, the Police had interviewed Malami who said he does not know Ajodo.

According to him, the Attorney General actually confirmed that his ministry had initially constituted recovery team, but that team had since been disbanded, and even its default Chairman, is undergoing prosecution by Independent Corrupt Practices and Other Related Offences Commission (ICPC).

“He, Ajodo, also told us that he was the one who lifted the AGF signature from another document and imposed it on his identify card.”

Speaking earlier, Wike charged the the IGP to unravel the real motive behind the recent invasion of the residence of Justice Mary Odili.

The governor, said it is curious that weeks after the obnoxious invasion of Justice Odili’s residence, the magistrate who issued the search warrant, has not been interrogated to account for his action.

In a press statement by Kelvin Ebiri, his Special Assistant (Media), Wike was quoted as commending the IGP and his team for the arrest of some of the suspects involved in the condemnable invasion.

He, however, charged the Police to get to the root of the matter in order to ensure that all those directly or indirectly involved face the full wrath of the law.

“We believe, we should get to the root of this matter and anybody who is directly or indirectly involved should face the wrath of the law. It does not matter the person’s position. That is the only way somebody can stop saying if a Justice of Supreme Court, second in command, could face this, what about the ordinary people, what will happen? I am quite confident that you will unravel whatever that has happened.”

The Rivers State governor expressed concern that if all culprits are not arrested and prosecuted, law abiding citizens will be reluctant to grant access to their residence to anyone that brandishes a search warrant at them.

Governor Wike, pointed out that the October 29 incident has generated a lot of misgiving and negative perception about the activities of some security agencies.

According to him, the only way public confidence in security agencies can be restored, is when all those who engaged in the despicable act, are exposed and punished in accordance with extant laws of the land.

The governor said the government and people of Rivers State are concerned that the magistrate who issued the search warrant has not been quizzed to determine the motive for his action.

Governor Wike, commended the IGP Baba for being apolitical and professional in the discharge of his constitutional responsibility.

He observed that because the IGP has conscientiously refused to politicise the issue of security, Rivers State security architecture has been yielding positive results.

“Today, in my state, the level of peace, the level of security we enjoy is as a result of your support not to interfere, not to politicise the issue of security. It is unfortunate that the state has had series of crisis. Since I took over in 2015, I think we have had more than 10 Commissioners of Police .”

The governor, assured IGP Baba that the Rivers State government will not relent in its support for the police and other security agencies.