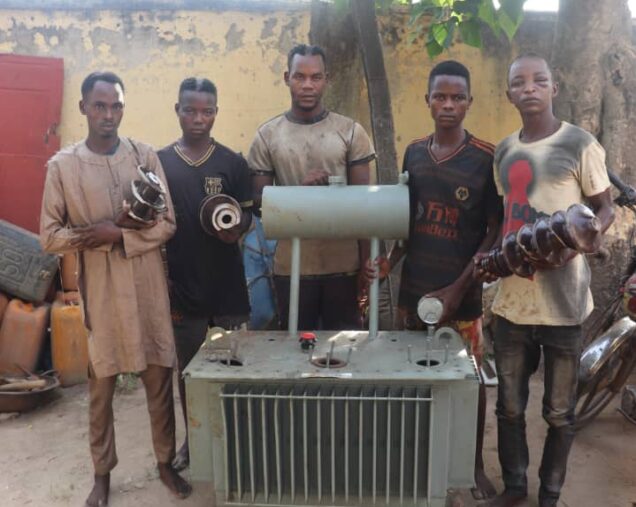 The Niger Police command has arrested a fake soldier, Emmanuel Dominic and a five man gang that specialised in vandalising transformers in Chanchaga Local Government Area of the state.

The command’s Public Relations Officer (PPRO), DSP Wasiu Abiodun, disclosed this in a statement issued in Minna on Wednesday.

The suspect dressed in Nigerian Army camouflage, went to the Police Division to bail a friend.

He paraded himself as a soldier of Nigerian Army and gave his service number as 05313.

Dominic claimed to be attached to TRADOC, Minna .

During interrogation, the suspect was discovered to be a fake soldier and subsequently arrested.

“The suspect later confessed that he had been a barrack boy of Army barrack Minna.

He claimed that the uniform in his possession belongs to his late father who was a soldier.

The suspect equally confessed to have been robbing victims in Minna and its environs with the wooden carved gun, jackknife and the axe.

Similarly on Nov.2 at about 19:20 hours, Police operatives attached to Chanchaga Division arrested the five suspects for theft of two transformers in Lapai-Gwari area Minna.

He explained that the suspects were arrested at Lapai-Gwari area along Building Materials Market Road, Minna by a Police patrol team during routine patrol of the area.

The suspects conspired among themselves, to vandalise two electric transformers in the area and cart away some of the electric cables.

During interrogation, four suspects arrested at the scene confessed to the crime and led the Police to arrest Salisu Usman at Kasuwan-Gwari, Minna who bought the cables from the suspects.

Exhibits recovered from the suspects were three insulators and a vandalised electric transformer.

Abiodun said that all suspects will be arraigned in court for prosecution immediately after investigation is concluded.