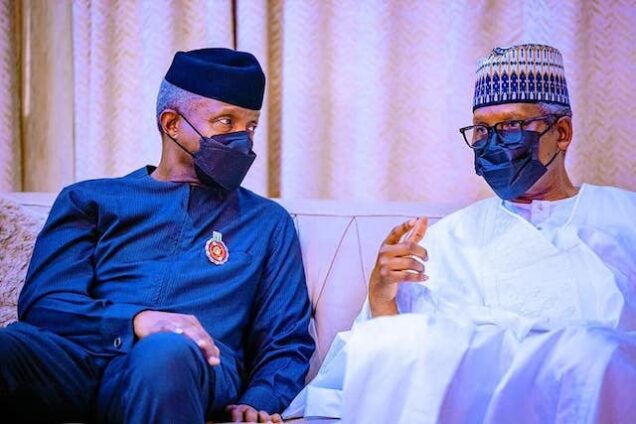 Osinbajo with Aliko Dangote during the condolence visit

Vice President Yemi Osinbajo, said the late Sani Dangote was not only a brother and friend but also a collaborator in some of the decisions taken by the Buhari administration, especially in the agricultural sector.

Osinbajo stated this today in Kano during a condolence visit to the families of Dangote and Dantata over the death of the businessman.

The VP also condoled with the Emir of Kano Aminu Ado Bayero.

Osinbajo was accompanied on the condolence visit by Mr Boss Mustapha, the Secretary to the Government of the Federation, Senator Kabiru Gaya, Ado Doguwa and the Presidential Political Adviser, Senator Babafemi Ojudu.

He was received at the Mallam Aminu Kano International Airport by Kano State Governor Abdullahi Ganduje.

The body of the deceased had earlier arrived in Kano and was buried after the funeral prayers at the Palace of the Emir of Kano.

Commiserating with the families of Dangote and Dantata, the Kano Emirate, and the people of the State at large, Prof. Osinbajo said the demise of the businessman was not just a loss to the deceased family and Kano State alone, but to the nation at large.

Speaking at the family house where he met Alhaji Aliko Dangote, the deceased’s wife Aisha, and other members of the family, the VP said:

”We are here to commiserate with you, the Federal Government already sent a delegation, they just left, but Sani was a good friend of mine, somebody I considered a collaborator.

“He was very instrumental in drawing up our tomato policy and there are several other agricultural policies that he was part of.

“It was a big shock for us that he had passed on. I want to extend my own personal condolence to you and other members of the family.

“This is a very sad event but I know that the Almighty God will comfort the family.”

Aliko Dangote thanked the VP for coming and noted that the family is consoled by Prof. Osinbajo’s kind words and prayers.

The Emir of Kano, Aminu Ado Bayero, welcomed Prof. Osinbajo to the palace and said his visit was an indication of his love for the State.

“Sani’s death is not only a loss to Kano State but a loss to all Nigerians especially the Vice President who has a long-standing relationship with the late Sani.

“You know your good friends in bad times and in good times,” the Emir added.

He then thanked both the Federal and State Governments for their efforts at improving the lives of the people through various development projects and pledged his support for the actualization of more laudable programmes.

Before leaving the palace, Prof. Osinbajo signed the condolence register, expressing his personal condolences on the demise of the late businessman.

Aside from the visit to the Emir’s palace, the VP also visited the widow of Sani Dangote, Aisha, the mother of the deceased, Hajia Mariya.

He also paid a visit to the family house of the Dantatas, where he was received by the famous Nigerian businessman and philanthropist, Alhaji Aminu Dantata.