Police warn against blocking of highways in Akwa-Ibom 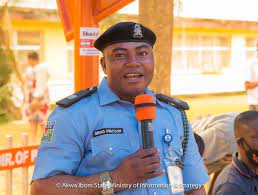 Police have warned against blockade of roads in Akwa Ibom following multiple accidents which claimed four lives at Akon Itam on Calabar/Itu highway on Nov 13 as a result of blockade of the road by youths.

SP Odiko Macdon, the Police Public Relations Officer in a statement in Uyo on Wednesday therefore warned youths against unjustified protests and blockade of highways in the state.

Macdon said that the Commissioner of Police, Mr Andrew Amiengheme, decried the incessant blockade of highways by youths.

The spokesman said that there was a fatal multiple accidents at Akon Itam on Calabar/Itu highway on Nov. 13, which claimed four lives as a result of blockade of the highway by youths.

He noted that the blocking of the highway in protest caused road users untold hardship and exposed some of them who diverted through other rural routes where they experienced extortion and robbery, a trend he said was totally unacceptable.

“The CP, therefore, called on Youths to desist from blocking any highway whenever an accident occurs or whenever there is a pending issue with government/institutions.

“Rather than resort to blocking of highways which is an offence and punishable under the law, it is better to allow the law take its course,” Macdon said.