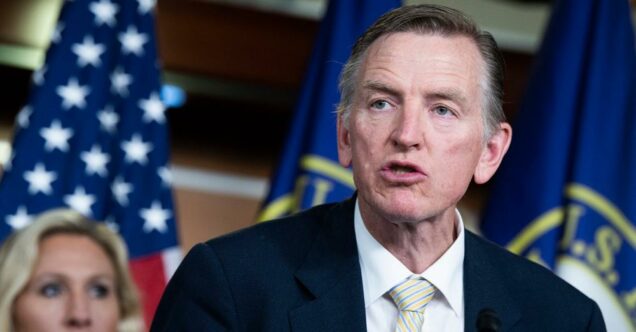 The U.S. House of Representatives voted 223-207 on Wednesday to censure Republican Paul Gosar for posting a violent cartoon video.

The measure stripped Gosar of his committee assignments, including a seat on the House Oversight Committee, a panel on which he had served alongside Ocasio-Cortez.

Last week, the anime-style video that featured him slashing Ocasio-Cortez in the back of the neck and attacking the president was posted to Gosar’s social media accounts.

“Any anime fans out there?” Gosar’s Twitter account asked. The clip altered the opening credits of the Japanese animated series “Attack on Titan” and included clips of Border Patrol agents.

After a call from House Minority Leader Kevin McCarthy, Gosar deleted the video and issued a statement saying he does not “espouse violence or harm towards any member of Congress or Mr. Biden.”

He also insisted that the video was “a symbolic portrayal of a fight over immigration policy” and that the backlash to it was “infantile.” And he did not apologize.

“It is a symbolic cartoon,” Gosar said in his statement. “It is not real life.”

Ocasio-Cortez called for Gosar to be removed from Congress.

Speaking on the floor prior to the final vote, Pelosi called it a “sad day for the House of Representatives, but a necessary day.”