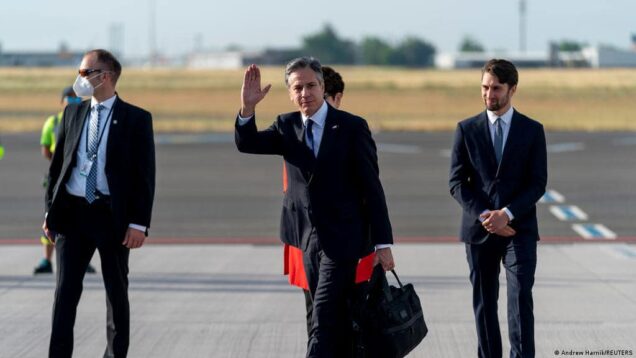 Blinken is the highest-ranking Biden administration official to visit sub-Saharan Africa since January.

With Nigeria facing terrorism in the North east and North west, it is expected that the two will discuss possible security assistance from the United States.

It is also expected that Blinken will touch on human rights issues during his visit especially in the wake of a judicial panel report which indicted the police and the army of firing on protesters in Lagos last year in what it called a “massacre.”

He will surely have a welcoming smile from Buhari today having removed Nigeria Wednesday from the black book of the violators of religious freedom, a move that has earned Blinken a rebuke from the The U.S. Commission on International Religious Freedom (USCIRF)

In Obama years, human rights consideration was the main reason America refused to sell the A-29 Super Tucano to the Goodluck Jonathan administration.

Blinken’s final leg of his first Africa journey is Senegal, considered one of Africa’s most stable democracies, where the focus will be on leaders and female entrepreneurs.

He will also visit Dakar’s Institute Pasteur, which signed an agreement – alongside Rwanda – with BioNtech in October to build the first mRNA vaccine manufacturing facility in Africa starting in mid-2022.

Biden’s government has said it was working with manufacturers to help African countries boost vaccine production.