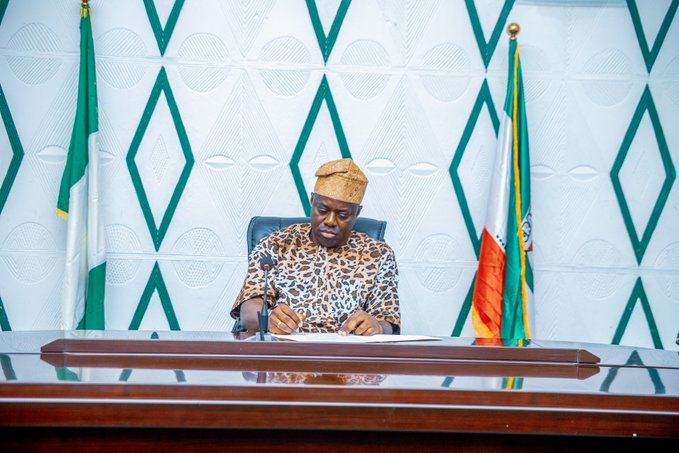 Governor Seyi Makinde has donated N32.5 million, to family members of 13 Amotekun members who died within the first year of the outfit.

The governor made the donation at the first anniversary of the Oyo State Security Network Agency codenamed Amotekun Corps.

He also commissioned the headquarters of the outfit.

The event which was held at the Agbaakin, Moniya, Ibadan, had the Deputy governor, Engr Rauf Olaniyan and an array of government officials.in attendance.

“It is almost impossible today to think of an Oyo State without members of the Oyo State Security Network”, Makinde said.

“Amotekun has become so integrated with our state’s internal security that it is hard to believe that they were operationalised a year ago, on November 18, 2020.

” Everywhere we go, we see them; in the city and rural areas, they are ready to respond to distress calls.

“Although the Oyo State security network is part of wider Western Nigeria Security Network, we knew how important Amotekun would be in securing our state from the outset.

“And that is why we were at the forefront of working with the DAWN Commission to ensure that the other five South West governors bought into the vision.

“Once that vision became a reality, we signed the Oyo State Security Network Agency, Amotekun Bill 2020, into law in March 2020. We then embarked on recruiting 1,500 personnel for the Corps.

“As you well know, most of the people recruited were already part of the various vigilantes and neighborhood watch groups.

However, guided by the Amotekun Act, the recruits were subjected to training on operating procedures.

“Since then, they have been working under General Ajibola Kunle Togun and Retired Colonel Misiriyu Olayinka Olayanju as Chairman and Commandant, respectively.

“Both of them were former officers of the Nigerian Armed Forces and fine gentlemen.

“There were few hitches along the way. At some points, people even called for the scrapping of the Corps but this was not unexpected.

“Remember that Amotekun Corps was operationalised just as Nigeria was recovering from the EndSARS protests. There was already a lot of bad blood against anyone who represents them or work as a security agent.

“So, it became imperative for us to ensure that the Corps members never acted beyond their constitutional powers and authorities.

“From time to time, we have had to punish errant officers. However, for the most part, members of the Amotekun Corps have served our state diligently. Some of them have even paid the supreme price in a bid to secure our lives and properties.

“Yes, I handed over cheques to the next of kin of those fallen heroes but I specially want to acknowledge these 13 heroes of ours.

“They are our heroes and Oyo State will remain grateful. And for the loved ones they have left behind, we will do everything within our power to support them.

“I want to use this opportunity to convey the heartfelt appreciation of the government and the people of Oyo State to you, serving members of Amotekun. We say thank you for your thankless service.

“While we are sleeping, you help keep us safe but we hardly remember you guys when you are awake. I read your report and see your daily and weekly activities.

“We know you expose yourselves to high-risk situations. You confront ritualists, armed robbers, kidnappers, bandits and other criminals despite the constitutional restrictions on the kind of weapons you can carry; you have chosen to do your part to keep us safe. We say thank you.

“I want you to know that each time you respond to a distress call or make an arrest and hand suspects over to the Police, you play a big role in making Oyo State safer for all of us. You make it possible for investors to have confidence in our state.

“Ultimately, you do your part to ensure that we grow Oyo State economy and, today, we celebrate you.

“Write it down and I stand to be challenged later in future. Akinyele local government area will be the richest LG in Oyo State in another ten years.

“So, to our Amotekun Corps, on our part, we will continue to support you with the necessary equipment you need to carry out your duties. As we celebrate the first anniversary today, let us, again, be reminded that even though we have the Amotekun Corps supporting other security agencies in keeping our state safe, security is still everyone’s business.

“As we always say here in Oyo State, if you see something, say something and the authorities will do something. We still have the number 615 for security emergencies. It is free to call anywhere in the state. We will continue to work to ensure that anyone who calls that number gets a swift response.

“Conclusively, we still believe that community policing is one of the best ways in tackling insecurity in our state. Thanks to Amotekun, other security agencies and all who have worked hard in this sector. We could not have been where we are without your collaboration with Amotekun. You will all agree that even the rate of crime reportage in the rural areas of Ibarapa zone has reduced.

The Chairman, Oyo State Amotekun Corps, Brig.-Gen. Kunle Togun (rtd), lauded the efforts of the governor to set up the state security outfit with a view to tackling insecurity plaguing the South-West region.

He noted that Oyo State has the highest number of the operation’s intakes in western region, adding that Governor Makinde has supported the corps in the realization of having its headquarters.

The commandant, Colonel, Olayinka Olayanju, said the establishment of Amotekun was a clear commitment to deal with the threat of crimes and law- breaking in our state.

He said apart from the 13 dead, the corps also has 32 nursing various degrees of injuries from gunshot wounds and fractured bones.

He also added that 37 personnel have been summarily dismissed for various offences ranging from extortion, illegal activities, extra judicial killings, theft and insurbordination in the last one year.

Attorney General and Commissioner for Justice, Prof Oyelowo Oyewo, a representative of the Commissioner of Police in the state and the Onpetu of Ijeru, Oba Sunday Oyediran, also gave goodwill messages at the anniversary.