Only 25% have access to sanitation in Northwest Nigeria - UNICEF 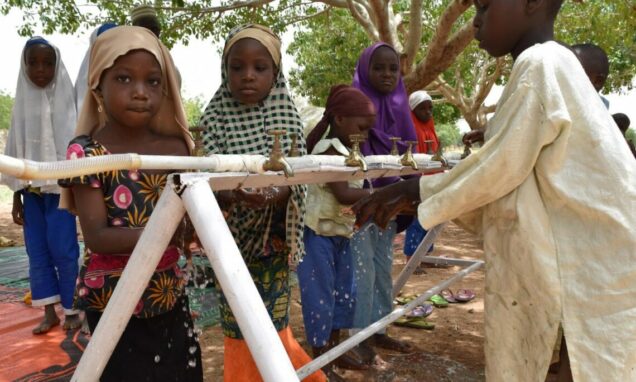 Only 25% have access to sanitation in Northwest Nigeria - UNICEF

Mr. Maulid Warfa, the UNICEF Chief Field Officer, Kano, and the Sokoto States, said only 25 percent of those living in Northwestern Nigeria have access to sanitation, with about 38 percent having access to good hygiene.

Warfa made the disclosure on Friday during a one-day program to commemorate 2021 World Toilets Day held in Sokoto.

The program was organized by the United Nations Children Fund (UNICEF Sokoto Field Office) in collaboration with the state governments of Kebbi, Sokoto and Zamfara.

The theme of the program is: “Valuing Toilets.”

Warfa described the development as very unfortunate but said that the reality must be told.

He, however, recognized the great works of RUWASA in Sokoto, Kebbi, and Zamfara, saying, “But we are not there yet, until every community, every local government area and every state is open defecation-free.

“I think this is the goal that we are all aiming and that’s where we want to be. Those of us who have been with the public health and humanitarian work do understand that if we fix the sanitation and hygiene, we will be able to solve at least 60 to 70 percent of public health issues.

“And once their cognitive ability is affected, their ability to become productive and contributors to the country’s economic growth is also severely affected,” he said.

He observed that if open defecation and poor hygiene were adequately addressed, incidences of cholera, polio, diarrhea and environmental diseases would have been addressed.

Warfa advocated for collaborative efforts from all stakeholders, including religious, political, and community leaders towards achieving the target of Nigeria of open defecation free by 2025.

The chief field officer challenged journalists to rise up to the challenges of addressing the difficulties faced by communities for the good of all Nigerians.

He argued that journalists had the best and greatest weapon to change society for the better through humanitarian reportage.

In his speech, the Commissioner for Water Resources, Kebbi State, Alhaji Nura Kangiwa, said the ministry was always happy to partner with UNICEF on anything that would improve the living standard of the people.

He recalled that since the campaign against open defecation was launched by President Muhammadu Buhari, Kebbi State Government had been collaborating with UNICEF to construct toilet facilities in most public schools.

The commissioner noted with satisfaction that the Kebbi State Universal Basic Education Board (SUBEB) had so far constructed over 100 toilet facilities in both primary and secondary schools.

Kebbi State Commissioner for Environment, Alhaji Hayatu Bawa, assured that the ministry was currently in partnership with an organization funded by USAID to provide wash facilities in three LGAs of the state to improve sanitation.

He listed the LGAs to benefit from the gesture to include: Kalgo, Argungu and Dandi, adding that the essence was to improve on the wash facilities in those areas.

Bawa said the state government was doing a lot to improve environmental sanitation and improving water quality, adding that recently the ministry got approval to provide dump sites in the state.