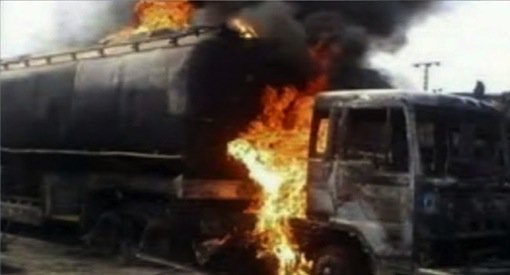 Two cars were burnt on Thursday night in Ibadan, when a fully loaded petrol tanker, went up in flames.

According to an eyewitness, Mr. James Oladeji, a commercial tricycle operator, the incident occurred at Agodi area of Ibadan, on Total Garden-Gate road, near the Nigerian Television Authority (NTA) Station, in Ibadan.

Oladeji said the driver of the tanker, laden with premium motor spirit, jumped out from the truck when he noticed the fire from the engine apartment of the truck while in motion.

He said the truck, with no driver in control, spilled its content on the road before exploding.

Two vehicles were burnt while the occupants of the cars were said to have narrowly escaped death.

Four water tank trucks from both the Federal and State Fire Services were deployed to the scene as officers made frantic efforts to prevent the inferno from spreading.

The dual carriageway was cordoned off by security operatives who diverted traffic from the axis to other parts of the city.

Speaking on the incident, the Director of Operations, Oyo State Fire Services, Mr Ismail Adeleke, confirmed the incident, saying that he and his men were at the scene as at 11 p.m. before they could finally put off the fire.
He said no life was lost in the incident.