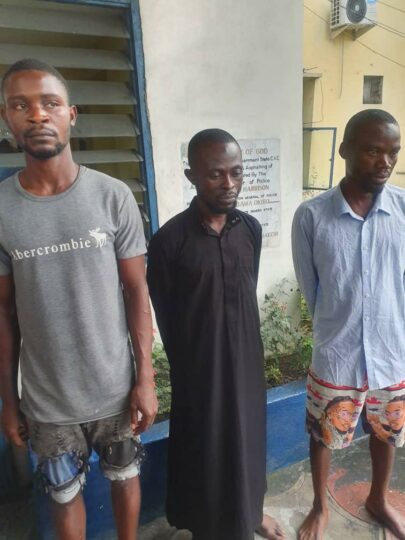 The Rivers State Police Command has arrested the three suspects, including a herbalist who allegedly killed nine- year- old Destiny Peter by severing his head from the body.

Destiny Peter was reported missing to the police and youths in the community by his aunt on Thursday November 11,2021.

In a press statement, SP Nnamdi Omoni, Rivers Police Command’s spokesman said a serious serious search which was launched as a result of the report led to the recovery of the headless body of Peter in the bush the following day.

“However, through intelligence gathering, the identities of Kenneth Sylvanus and Chibuzor Amadi were revealed.

“Chibuzor Amadi was immediately arrested and on interrogation, he took the Police to an uncompleted building in Azumini Isiokpo, headquarters of Ikwerre local government Council area where Kenneth Sylvanus was arrested.

“They were taken to the Isiokpo Area Command and later transferred to State Criminal Investigation Department for further investigation”.

“Omoni said that in continuation of the investigation, men of the State CID, immediately took steps and went with the two suspects who gave clearer perspectives to the crime, led the Police to the bush where the dismembered head of the deceased was recovered behind an uncompleted building.

“However, on further interrogation, Kenneth Sylvanus confessed that he is the one who killed Destiny Peter and that it was the 3rd suspect Chijioke Ogbonnah who asked him to bring a human head for him to buy.

“Based on his confession, the said Chijioke Ogbonnah was arrested on Thursday November 18,2021 in his house at Omagwa.

In his statement, Ogbonna Chijioke denied any involvement in the murder case, adding that he is a herbalist and sells spiritual materials, including treatment of all kinds of ailments.

So far, all three suspects are helping the Police in the investigation.