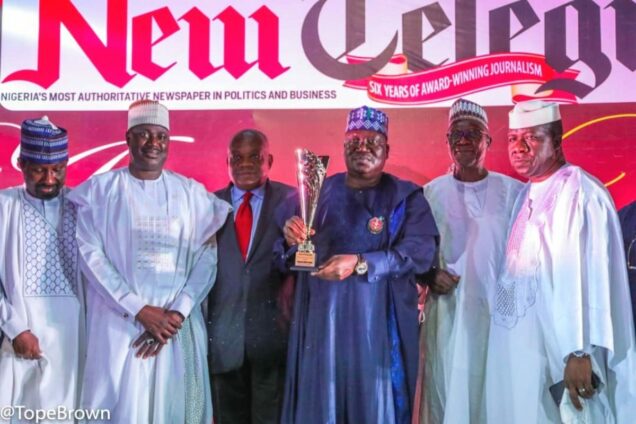 Mr. Ahmad Lawan has said the ninth senate which he is presiding over as the president has achieved great success since it was inaugurated as a result of determination of lawmakers to work together to achieve great deeds for the nation.

The Senate President who is in his fourth term in the upper chamber of National Assembly spoke on Friday night, while receiving the New Telegraph’s Lifetime Achievement Award in Politics in Lagos.

Awards were also presented to other Nigerians who had distinguished themselves in public service and the private sector.

Commenting on the performance of the Senate under his leadership, Lawan said, “This is my fourth term in the Senate; when we came in 2019, our colleagues decided to give us the opportunity to serve them

“As a member, I have never seen a Senate chamber that is so united, determined and focused on achieving great deeds of legislation and development for our dear nation as this.

“The ninth Senate and indeed the ninth National Assembly has recorded great success and that is not to say that we have not differences, we all decided that this time around, we must work for Nigeria, together in spite of our political dispositions.

“It is in this regard that we have said that the 2022 appropriation budget would be passed before Christmas so the executive would begin to act on it in the following year,’’ Lawan said.

He also said criminals should be made to face the full wrath of the law and not enjoy any special support from any ethnic group.

The Senate President advised Nigerians to remain united to be able to fight insecurity.

He said, “Crime committed by anyone is crime. If someone from an ethnic group commits a crime, he is a criminal. Is that not what he is?

“The country is supposed to fight against that person. Criminals should not enjoy any support from any group, even if it is from their ethnic group.

“Nigeria faces security challenges, but I feel there is determination by all levels of government to fight the insecurity that we face.

“In some areas, we succeeded; in others, we are still working hard to succeed. What is important is for us to think to remain focused, undivided and united as a people,” he said.

Governor of Lagos State, Babajide Sanwo-Olu, said while receiving award for good governance of the Year 2021, that he dedicated it to the over 22 million Nigerians living in the State.

“Indeed it is an honour and every sense of humility that I receive this award on behalf of the entire 22 million Lagosians who continue to support our government, who continue to see that indeed the journey of a greater Lagos is on course, who continue to bear with the little inconveniences of all of the infrastructure that we are doing.

“I also dedicate it to them for continuing to believe that their hope is not lost on us and those who continue to encourage us to do more that is required, I want to thank all of you,’’ he said.

Godwin Emefiele, Central Bank of Nigeria Governor, said while receiving the Number One Banker of the year award, that he believed the award was a drive for him and his team to do more to better the country.

“I think it will be an impetus for us and the team around me to continue to do the work for the betterment of the bank, the country and all Nigerians,’’ he said.