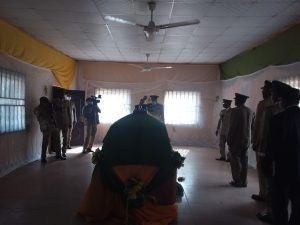 The remains of the pioneer Comptroller General (CG) of the Nigeria Correctional Service (NCoS), Josiah Ojo, have been laid to rest in his GRA residence in Benin, Edo, amidst tributes.

The late Ojo, who hailed from Ujoelen-Ekpoma and became the first CG of the then Nigeria Prisons Service (NPS) on Oct. 1, 1992, died at the age of 90.

Earlier in a sermon, the Bishop of Benin Diocese of the Church of Nigeria (Anglican Communion), Most Rev. Peter Imasuen, describe late Ojo as an embodiment of humility and intelligence.

The bishop said at St. James Anglican Church, Benin, that the former comptroller general dedicated his life to humanity and God’s service, and urged Nigerians to emulate his selfless service.

“We should learn to be upright and follow God’s dictates and impact society as our brother Josiah Ojo did in his lifetime,” the cleric said.

In his tribute, the current Comptroller General, NCoS, Haliru Nababa, eulogised the deceased, whom he described as an exemplary and charismatic leader that positively impacted his generation.

Nababa, represented by the Deputy Comptroller-General Health and Welfare, NCoS, Tunde Ladipo, said the late Ojo was charismatic and dedicated himself to duty.

The CG described his late colleague as one of the finest officers of the service.

“His administrative dexterity was unique hence the ease in midwifing a change in the appellation of the head of the organisation from ‘Director of Prisons’ to ‘Controller General of the Nigerian Prisons Service.’

“The late CG played a significant role in laying the foundation for the virile and professional correctional service that we are proud of today.

“His track record of service to God and humanity remains a legacy for all to emulate.

“He will be greatly missed by NCoS because of the fatherly counsel that has continually helped in guiding and shaping the experience of those of us coming behind him,” he said.

Highlights of the occasion were the mounting of the guard of honour by NCoS’s officers, parade, and 21 gun salute to bid the late CG final farewell.