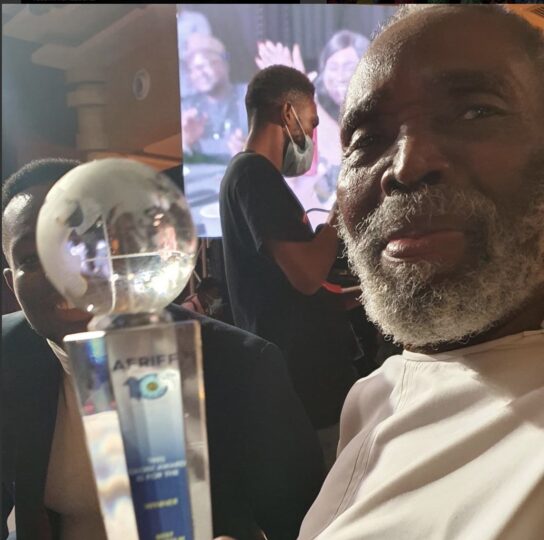 In case you missed it, veteran actor Olu Jacobs is battling with Dementia with Lewy bodies (DLB), also known as Lewy body dementia, one of the most common types of dementia, according to UK NHS.

At the last outing he made to receive a life achievement award at the Africa International Film Festival(AFRIFF), the 79 year-old Jacobs, usually debonair, looked frail.

What could be happening to the man who had acted on British TV series and Hollywood?.

His wife, Joke Silva has provided the answer: He has a problem with a variant of dementia, called Lewy body dementia.

P.M.News googled the ailment. We hereby share our findings, according to UK NHS:

There’s currently no cure for dementia with Lewy bodies or any treatment that will slow it down.

In the U.S., it is estimated to affect 1.4 million people, accounting for about 5 percent of all dementia cases in older individuals.

And it is the second most common dementia after Alzheimer disease.

Dementia is the name for problems with mental abilities caused by gradual changes and damage in the brain. It’s rare in people under 65.

It tends to develop slowly and get gradually worse over several years.

People with dementia with Lewy bodies may have:

*hallucinations – seeing, hearing or smelling things that are not there

*problems with understanding, thinking, memory and judgement – this is similar to Alzheimer’s disease, although memory may be less affected in people with dementia with Lewy bodies

*confusion or sleepiness – this can change over minutes or hours

These problems can make daily activities increasingly difficult and someone with the condition may eventually be unable to look after themselves.

*an assessment of symptoms – for example, whether there are typical symptoms of dementia with Lewy bodies

*blood tests to rule out conditions with similar symptoms
brain scans, such as an MRI scan, CT scan or a SPECT scan – these can detect signs of dementia or other problems with the brain

Treatments for dementia with Lewy bodies

There’s currently no cure for dementia with Lewy bodies or any treatment that will slow it down.

But there are treatments that can help control some of the symptoms, possibly for several years.

therapies such as physiotherapy, occupational therapy and speech and language therapy for problems with movement, everyday tasks, and communication

dementia activities, such as memory cafes (drop-in sessions for people with memory problems and their carers to get support and advice)

Outlook for dementia with Lewy bodies

How quickly dementia with Lewy bodies gets worse varies from person to person.

Home-based help will usually be needed, and some people will eventually need care in a nursing home.

The average survival time after diagnosis is similar to that of Alzheimer’s disease – around 6 to 12 years.

But this is highly variable and some people live much longer than this.

Causes of dementia with Lewy bodies

Dementia with Lewy bodies is caused by clumps of protein forming inside brain cells. These abnormal deposits are called Lewy bodies.

These deposits are also found in people with Parkinson’s disease, and they build up in areas of the brain responsible for functions such as thinking, visual perception and muscle movement.

It’s not clear why the deposits develop and how exactly they damage the brain. It’s thought that part of the problem is the proteins affecting the brain’s normal functions by interfering with signals sent between brain cells.

Dementia with Lewy bodies usually occurs in people with no family history of the condition, although there have been very rare cases that seem to run in families.