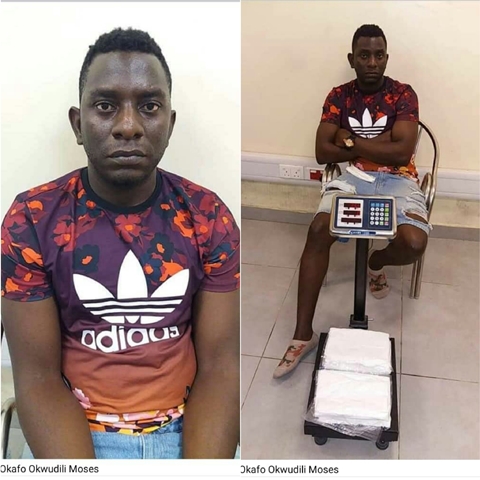 Operatives of the National Drug Law Enforcement Agency, NDLEA  have busted a suspected Brazil-based drug dealer, Okafor Okwudili Moses over a 2.55 kilograms of cocaine recovered from a toilet at the E-Arrival hall of the Murtala Muhammed International Airport, MMIA, Ikeja Lagos.

A statement issued by NDLEA spokesman, Femi Babafemi on Sunday said the drug was discovered in the toilet of the airport on Friday 12th November after it was dumped there by a trafficker who was obviously scared of being caught by narcotic officers positioned at the airport.

He said the following day, Saturday 13th November, the actual owner of the consignment, Okafor arrived the airport from Brazil via an Ethiopian Airline flight and was promptly arrested.

“While being interviewed in custody, he confirmed he is the owner of the seized illicit drug,” Babafemi said.

Reacting to the arrest of Okafor Chairman/Chief Executive of NDLEA, Brig. Gen. Mohamed Buba Marwa (Retd) commended the officers and men involved in the operations for sustaining the heat on drug cartels in the country.