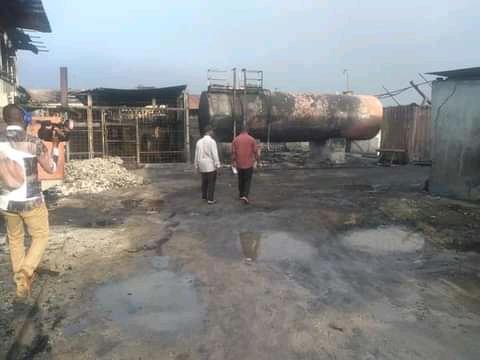 Rivers government has said it will investigate the cause of fire disaster at a warehouse in an abandoned company in Isiokpo street, D-line, Port Harcourt, the capital of Rivers State late Saturday.

The fire incident destroyed property worth millions of naira.

Eyewitnesses said the fire which raged between 11 pm and 12 midnight may have occurred as result of storage of illegally refined petroleum products popularly called “Kponfire” in the premises of the abandoned company.

The fire also spread to building of National Institute of Information Technology, NIIT, within the neighborhood and other nearby property.

Among the items burnt were a huge storage tank for petroleum products, a 40 feet container, a soundproof generator houses and cars.

Eyewitnesses lamented that despite distress calls put across to Rivers State Fire Service and private oil companies, none of them responded, except officers of the Federal Fire Service.

“It was the firefighters from Federal Fire Service who responded and contained the fire”, an eyewitness said.

However, the Rivers State government has assured that a high power panel of investigation will be set up to get to the root cause of fire.

Dr Peter Medee, Rivers Commissioner for Energy and Natural Resources who spoke to journalists at the scene of disaster on Sunday, expressed regrets that those living close to the scene of the fire disaster must have observed storage of illegally refined petroleum products at the abandoned building without reporting to his ministry or security agencies.

“Illegal and unwholesome activities and handling of petroleum products can only thrive here for a long time because neighbours refused to report to the government. However,we can only guess until the findings of an official investigation is comes out,it will be difficult to know the ascertain the cause of the fire,”Medee said.

On the accusation that men of the fire service refused to answer distress calls, Dr Medee explained that before firefighters from private oil companies can respond to emergency distress calls to fight fires, they have to seek official clearance from the companies.

He stated that the Federal Fire Service responded immediately because the state government has a good working relationship with them and they do not go through the rigorous protocols before responding to distress calls.

Medee clarified that so far, no casualty has been reported.

He also stated that the affected area will condoned off until investigation is concluded.