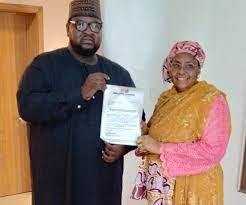 Alhaji Ibrahim Kalla, the Chief Press Secretary to the deputy governor, disclosed this in a statement issued to newsmen on Saturday in Katsina.

The appointment was announced in a letter, dated Nov. 14, 2021, and signed by the Director-General (DG) of the TSO, Alhaji Aminu Suleiman.

“This appointment is in recognition of your sincere commitment to the development of Nigerian Democracy and that of the TSO.

“And also, it is in recognition of your love and believes in the APC national leader, Mr Bola Tinubu’s political ideologies and contribution towards the development of the organisation”.

“I am pleased to inform you that your appointment is confirmed as National women leader of (TSO).

“The terms and conditions of your appointment, as well as your expected duties, shall be as contained in the Constitution of the Organization.

“It is my hope and belief that this appointment will serve as a motivation for you to continue to put in your utmost for the realisation of the TSO’s objectives,” the letter read in part.