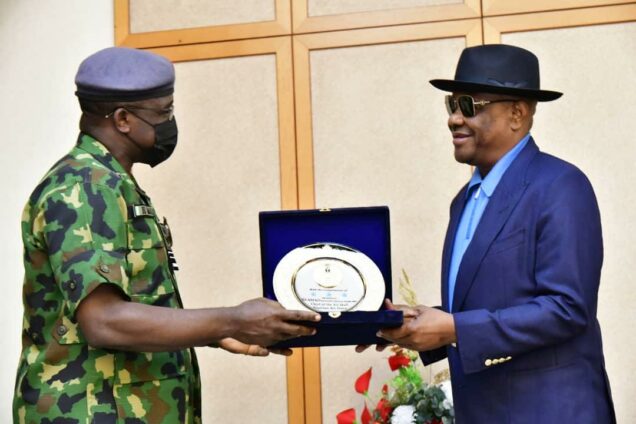 The governor also stated that the fight to stop oil theft has continued to fail because top ranking officers of the military are deeply involved in it.

Wike made the observation when he hosted the Chief of Air Staff, Air Marshall Isiaka Oladayo Amao on courtesy visit at Government House, Port Harcourt on Monday.

In a press statement signed by Kelvin Ebiri, his Special Assistant on Media, Wike was quoted as as noting that apart from the economic wastage it constituted, oil theft also led to degradation of the environment that impact negatively on rural communities in Rivers State in particular.

“I don’t know, whether we should take the issue of bunkering to even be more serious than treason. If you go around and see what has happened to our environment, you’ll have pity on us.”

Governor Wike also want members of the military taskforce deployed to arrest the illegal oil bunkers to find a better and environmentally friendly way to destroy bunkering sites in the State.

“If there is another civilised way to go about it, so that while you’re doing the right thing, let us not die. You should find another way to reduce this soot. Unfortunately, we have no helper. On the other hand, we continuing praying to God to touch the minds of these bunkers.”

Commenting on the war against insurgency, Governor Wike commended the military for the success that they have achieved in reducing the level of carnage Boko Haram and bandits have caused in parts of the country.

But the Governor noted that greater success can be achieved by deploying more military strategies, which is better than media publicity.

“Let me also thank you for what you are doing about the insurgency fight in the country. I do believe that strategy is very key in the fight against insurgency. It is not publicity.

“When you’re wining a war, the people will feel it. When people are secured, you don’t need to go to television to tell them that they’re secured. They’ll know from the environment that there are a lot of changes going on and that is the way Nigerians believe that, yes, we are wining the war against insurgency.”

Governor Wike pointed out that the prevailing peace in Rivers State was achieved because of the existing cooperation between all the heads of security with the state government.

According to him, Rivers people are comfortable and feel safe in their communities, and they can go about their normal business without the undue molestation from outlaws.

Governor Wike also assured the Nigerian Air Force of continuing the existing cordial relationship between it and the state government that started from the administration of Dr. Peter Odili.

The governor also urged the Nigerian Air Force to deploy the two armoured helicopters donated to them by the Rivers State Government to the State, in order to improve surveillance in the fight against criminality.

In his speech, the Chief of Air Staff, Air Marshall Isiaka Oladayo Amao said he is on operational visit to 115 Special Operation Group in Rivers State and decided to pay courtesy visit to Governor, who has contributed immensely to the functioning of their base in Port Harcourt.

Air Marshal Amao commended the governor for the good work he has continued to do in Rivers State in terms of provision of infrastructure.

“We commend you for being able to contain the security situation in the state. Rivers State has been a very peaceful State. That is why, most at times, I and the service chiefs have to focus on other places with much problems.

“The governor is able to achieve this state of peace because, from the brief I got from my officer, he has been a very good coordinator and also assisted the security agencies in the discharge of their duties.”

Air Marshall Amao also thanked Governor Wike for the financial support that was given to families of officers that died in the line of duty in the State.