Updated: At least 20 injured as SUV hits crowd in in Waukesha Xmas parade 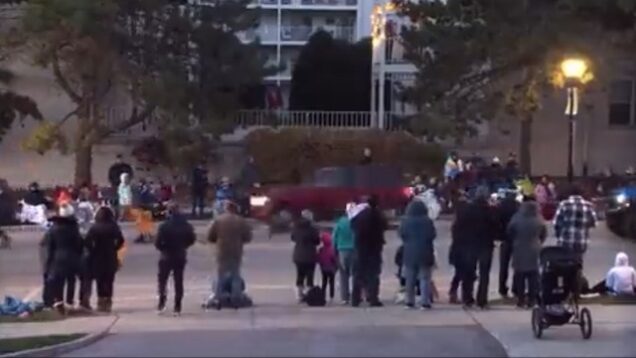 At least 20 were injured after being plowed down by an SUV on Sunday evening, according to preliminary reports from Waukesha Police Department in Wisconsin, United States.

Police have confirmed that one suspect has been taken into custody, but up to two more suspects may be on the run.

This may suggest that the incident may be more than an accident.

Local authorities initially labeled the incident as a mass casualty event, with some patients being rushed to hospitals outside of the city.

One witness told Fox 6 reporter Sam Kraemer that he saw dozens of people laying in the intersection of Barstow and Main, which has since been shut down by local law enforcement.

A family reunification site has been established at the Metro Transit Center near Bank St.

Graphic footage from an aerial vantage point shows a red SUV veering to the left before plowing over several children marching in the parade.

The SUV can be seen whizzing by members of a marching band in another brief video clip uploaded to social media. A police officer is then seen chasing the vehicle on foot.

Kaylee Staral, an eyewitness, told CNN that she saw a red SUV “running down the middle of the street” during the parade and, at first, thought the screams were for santa.

“It hit a lot of people,” she recounted, speaking of the SUV.

Other individuals from the scene claimed that cops fired several shots at the SUV after it began plowing over individuals — many of them children.