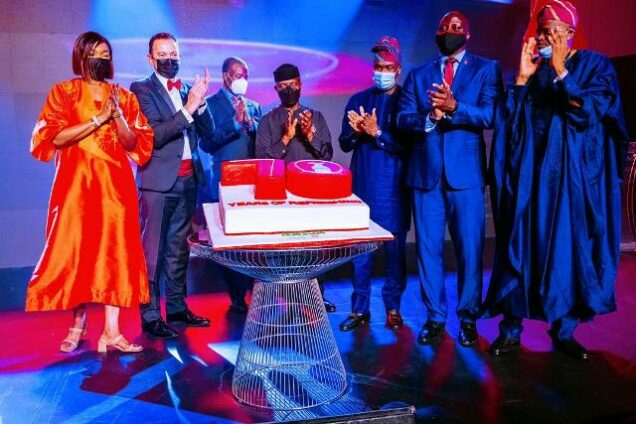 Osinbajo, others at the event

Vice President Yemi Osinbajo has said Coca Cola’s plan to invest $1 billion in Nigeria in the next five years testifies to the possibilities in the economy despite challenges.

Osinbajo stated this Monday evening at the 70th anniversary gala of the Nigerian Bottling Company (NBC).

According to the Vice President, “your ongoing investment in the country, which I am told will be in the order of $1billion in the next five years, testifies to your faith in the possibilities of Nigeria.”

“And you can rely on the partnership of the Nigerian government, (and i dare say the Nigerian people too) as you make these great strides.”

While narrating his personal and family stories about drinking Coke, including how he drank two bottles of Coke a day up until 2017, the Vice President reiterated that the Buhari administration’s commitment to “creating an environment that allows the private sector innovate and thrive remains active and sincere, despite the challenges.

“And we will continue to work with businesses across the broad spectrum of our dynamic economy to ensure that we do this with a clear view of the opportunities and problems of the day.”

Osinbajo further stated that in the 70 years that the company has operated in Nigeria, it has demonstrated “commitment to the Nigerian people with repeated investments, in the building of production facilities across the country, in creating thousands of jobs but also in your active support of every aspect of our national life, from health to education, from women and youth empowerment to sports. All done with conscious respect for the environment.”

Continuing, Osinbajo said “I think it is fair to say that the commitment has been met with the enthusiastic patronage of generations of Nigerians; families who have been supported by the stable careers of staff who have grown with the company through the years.”

He explained that “young people who have found successful careers in sports and entertainment inspired by your support; consumers from Lagos to Kano, Rivers to Plateau, linked by distributors in every region of the country, who have built enduring businesses getting Coca Cola into the hands of millions; a robust value chain that includes service providers and marketing agencies, creators of the iconic Coke adverts that have formed part of our individual and collective memories all these years.”

The high point of the event was the presentation of awards to distinguished staff and partners of the company across the country.

On his part, Board Chairman of NBC, Amb. Segun Apata recalled the company’s growth and contribution to the economy and noted that the company will continue in its 70 years tradition of investing in the economy as well as impacting its host communities through several initiatives, especially for the youths.

Nigerian Bottling Company also known as NBC was incorporated in 1951 but started production in 1953 at the basement facilities of the mainland Hotel, owned by Leventis Group, producing Coke licensed by the Coca Cola Company.

The gala night was also attended by the Deputy Governor of Lagos State, Dr. Obafemi Hamzat.