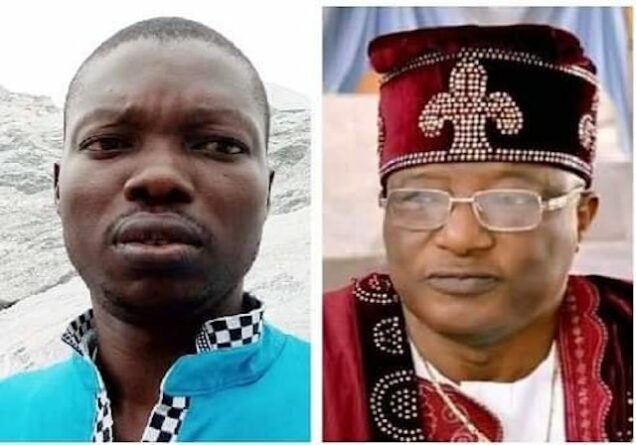 Timothy Adegoke and Chief Adedoyin, whose son is wanted by the police

Raheem Adedoyin, the fugitive son of the owner of Hiltons Hotels and Resorts, Ile-Ife arranged how OAU post-graduate student Timothy Adegoke’s corpse was evacuated and thrown into the bush.

Olokode attributed the revelation to one of the suspects now in police detention.

The suspect told the police that Roheem, who is the Managing Director of the Hilton hotel where Adegoke reportedly died, organised how the corpse was evacuated from the facility and buried without informing the police.

Olokode, however said Roheem is on the run, adding that in the course of police investigation into the matter, detectives were able to discover where the corpse was buried.

“One of the suspects confessed that the MD is the son of Dr Ramon Adedoyin’, Olokode said.

“His name is Roheem Adedoyin who is now at large. He also confessed that he (Roheem) organised the corpse to be thrown into a bush. The MD along with two managers took the corpse to the bush.

“None of the staff members informed the police. It was the report of the missing person that made the anti-kidnapping team who then discovered through their meticulous investigation and traced the so-called missing person to that hotel and then traced the corpse, where it was found.”

Olokode said the autopsy’s report will guide the police in their further investigation.

The remains of the deceased were later evacuated from a forest on Ede/Ife road by the police.

The police said that six suspects, said to be staff members of Hilton Hotels and Resort, Ile-Ife, and the owner, Ramon Adedoyin, were arrested by the police after investigation revealed that the late Adegoke checked into the hotel before he was declared missing.

It was learnt that the family of the deceased presented a pathologist to be part of the autopsy process, while the police pathologist and the investigating police officer (IPO) for the case were all witnesses to it.

Adekilekun appealed to the police to prosecute the case without fear or favour to any person(s) found culpable.