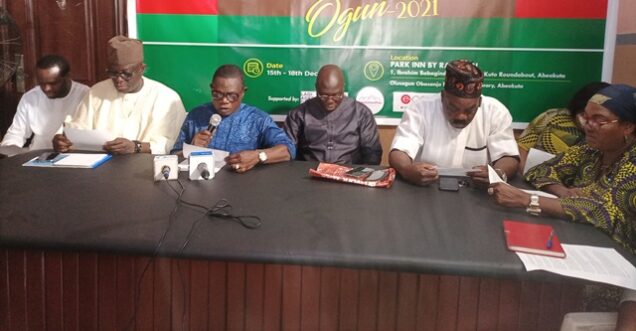 TAMPAN executives at the briefing

The Theatre Arts and Motion Picture Practitioners Association of Nigeria (TAMPAN) said it is set to host over 5,0000 movie practitioners for this year’s Conference of Nigerian Arts and Film (CANAF).

The event will showcase skills in arts, dancing, chanting, drumming, acting and many more.

TAMPAN made this known during a press conference held in Abeokuta, Ogun State.

According to the Deputy President of the Association and also the Planning Committee Chairman, Alhaji Abbey Lanre, the conference coming up in December 15-18 with the theme “Film as a tangible Asset” is targeted to encourage quality productions by promoting creativity and originality.

Olanrewaju said that discussions would be held on how practitioners could earn money from their work even in old age.

The President of TAMPAN, Bolaji Amusan said the association is expecting assistance across the globe.

Speaking with newsmen in an interview, Mr Latin lamented increase of piracy of production.

He, however, labelled the Nigerian Copy Right law (2004) as weak and not strict enough to fight piracy of movies in the country.

He called on the National Assembly to enact a strong law against piration of movies in the country for the practitioners to enjoy the fruit of their labour.

Mr. Latin noted that the current copy right law puts piracy at a bailable offence and that the bail is often at a ridiculous or small amount, saying that piracy is making them work like elephants and eat like ants and that if this continued they would eat less than ants.

He disclosed that practitioners all over the country were already taking the bull by the horn under the Audio Visual Rights Society (AVRS) as they went to hotels last week to sensitize them that viewing their movies in their hotels without their permission is wrong.

His words “I have said it at different forum that the only way for we practitioners to enjoy the fruit of our labour is for the National Assembly to enact a very strict and strong law that will protect us. The current law against piracy is a very weak law, it’s a bailable offence.

“We are planning on that because we have so many Guilds and Association in Nigeria but, we have one Umbrella body, we are trying to come together with the heads of various Guilds.

“Piracy is like Cankerworm, it’s like cancer eating deeply into the fabric of the creative industry and if we don’t try to kill it, it will kill the industry.

“We are working as elephant and we are eating as ant, a time will come when we will not be able to eat as ant.”