No, You Can’t Have It! Sanwo-Olu Takes on Fashola 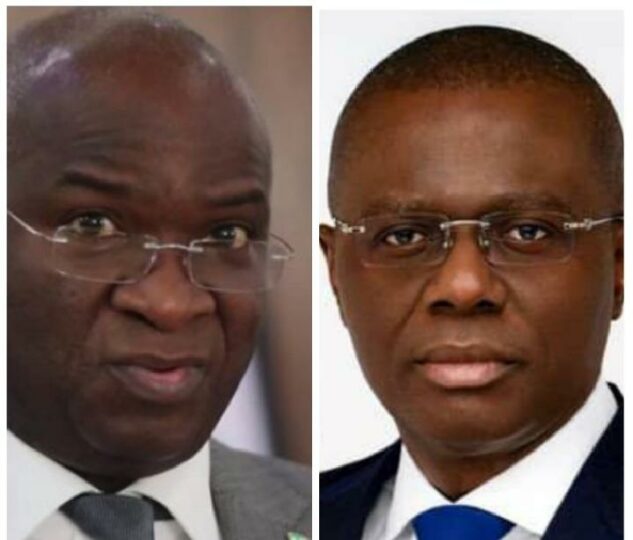 Governor Babajide Sanwo-Olu of Lagos State and Mr Babatunde Raji Fashola, Works and Housing Minister, are on each other’s throats. The bone of contention is which, between Lagos and the Federal Ministry, has the right to advertising infrastructure and assets on selected federal roads in the state.

Trouble started when the Federal Ministry of Works and Housing published an advert on page 33 of THISDAY Newspaper of Monday, 1 November 2021 titled ‘PUBLIC NOTICE/CAVEAT EMPTOR RE:REQUEST FOR EXPRESSION OF INTEREST (REOI) FOR THE CONVESSION RIGHTS TO ADVERTISING INFRASTRUCTURE AND ASSETS ON SELECTED FEDERAL ROADS IN LAGOS STATE”.

Thus, Lagos State also published an advert on page 13 in The Nation of 24 November 2021, LAGOS STATE GOVERNMENT REJOINDER TO THE PUBLIC NOTICE CAVEAT EMPTOR PUBLISHED BY THE FEDERAL MINISTRY OF WORKS AND HOUSING, countering the position of Federal Ministry of Works. It was signed by Gbenga Omotoso, Commissioner for Information and Strategy.

It went further: “Therefore, any Act and/or Regulations made by the Federal Government for the purpose of regulating, controlling or approving advertisement in Lagos State is null and void as same amounts to an usurpation of the residual powers of the State to legislate on the function of Lagos Government and therefore inconsistent with the provisions of the Constitution.

The use of the Right of Way of Federal Roads is clearly distinguishable from power to regulate advertisement in Lagos State. The Federal Ministry of Works and Housing only has right over the Federal Highways so long as it relates to its management and maintenance in the State.

Thus, the power to grant permit for the purpose of advertisement in the State cannot be exercised by the Honorable Minister of Works and Housing or be subjected to any approval or permit therefrom.

The members of the public are hereby notified that the Right of Way is a right of passage and not a proprietary right to the route. Therefore, the Public Notice/Caveat placed by the Federal Ministry of Works and Housing in respect of advertisement by Lagos State Government is ultra vires the powers granted to the Honorable Minister of the Federal Ministry of Works and Housing under the Federal Highways Act. The concession right to advertising infrastructure and assets is in line with valid and extant Laws of Lagos State and the Constitution of the Federal Republic of Nigeria 1999 (as amended).

The members of the Public are to take note of the above.”