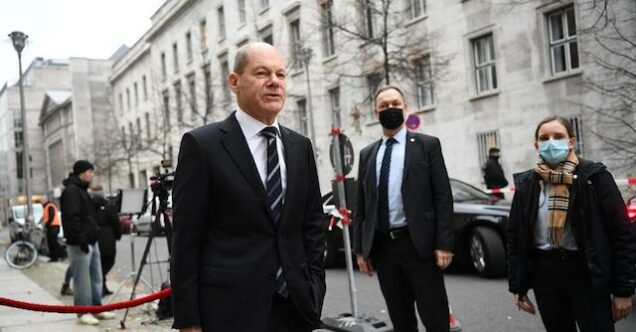 Olaf Scholz is Germany’s chancellor-in-waiting after his centre-left Social Democrats (SPD), the Greens and the pro-business Free Democrats (FDP) were able to cobble together a working coalition.

The coalition said Germany will remain part of NATO’s nuclear sharing agreement, a move that will prevent a rift in the Western military alliance at a time of rising tensions with Russia.

Germany does not possess nuclear weapons, but hosts U.S. nuclear bombs that German Tornado fighter jets are meant to carry to target during a conflict. read more

It had not been clear how the incoming government would handle the issue, as some lawmakers in the new coalition oppose Berlin’s participation in the nuclear sharing deal. read more

The coalition agreed to raise the minimum wage in one step to 12 euros.

The parties agreed to introduce a basic child insurance that will prevent poverty.

They will at the same time keep the pension stable, as promised.

“And we have agreed to push forward housing in the fight against high rents: 400,000 new apartments a year, 100,000 of which are publicly funded.

” We want to expand the digital infrastructure, so that there is fast internet and reliable mobile phone reception everywhere”, Scholz said in a post on Facebook..

The coalition parties also agreed to create more fiscal firepower for election promises by stretching the repayment period of coronavirus debt and bolstering the government’s climate investment fund with a budget manoeuvre.

The budget plans by Scholz will allow the parties to steer clear of creating off-budget investment vehicles, which had been floated as an alternative idea to circumvent debt limits and enable more public investment to speed up the shift towards a green economy.

However the coalition faces a massive spending problem as, in their coalition deal, they agreed to return to strict debt limits from 2023 and to avoid tax increases.

To create more fiscal leeway, the parties are set to use the emergency clause for the debt brake rule in the constitution for a third consecutive year and probably take on more debt than the initially planned 100 billion euros in 2022.

The three parties agreed to rework Germany’s repayment plan for the coronavirus debt and align it with the less strict repayment plan of the European Union’s recovery fund, according to the coalition deal.

This means that Germany’s next coalition government will push back the first repayment of coronavirus debt by five years from 2023 to 2028 and stretch the repayment period from two to three decades until 2058.

The parties also agreed to super-charge the government’s Climate and Transformation Fund (EKF) with “funds from already budgeted and unused credit authorizations through a supplementary budget” this year to enable additional climate protection measures and measures to transform the economy.

“The aim is to combat the consequences of the coronavirus pandemic and the simultaneous risks to the recovery of the economy and public finances caused by the global climate crisis”, the parties said.

The EKF would be in charge “even more than before” of financing measures for national and international climate protection as well as for the transformation of the economy, including steps to promote climate-friendly mobility, they added.

“With the federal budget for 2022, we will examine how we can further strengthen the climate and transformation fund within the framework of the constitutional possibilities,” the parties said.

Jens Suedekum, professor of economics at the Heinrich Heine University in Duesseldorf, said the budget manoeuvre would allow the ruling coalition to beef up the EKF this year and next, when the debt brake is still suspended, and then use the funds for public investments in the coming years.

A person familiar with the budget plans said that cabinet would have to pass the 2021 supplementary budget before the end of this year, but parliament could approve it at a later stage.