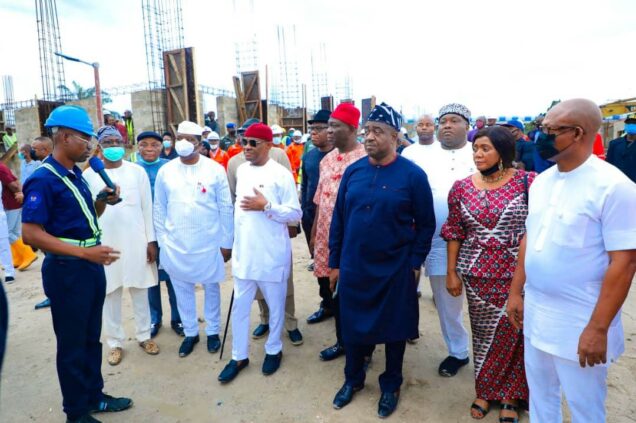 Members of the Nigerian Senate Committee on Judiciary, Human Rights and Legal Matters have have said Governor Nyesom Wike is boldly setting a high standard for legal education in the country with the ongoing construction of Dr. Nabo Graham Douglas campus of the Nigerian Law School in Port Harcourt

The Committee members gave the verdict shortly after inspecting ongoing civil construction work at the campus as part of their oversight function in Port Harcourt on Tuesday.

They first visited the staff quarters beside the Hotel Presidential and then to the Law School campus at Rumueme, Port Harcourt.

Chairman of the committee, Senator Michael Opeyemi Bamidele said they are, no doubt, impressed with what they have seen in Port Harcourt.

According to him, their colleagues in the Senate, including the leadership of the Senate who have invested so much trust and put them in charge of the committee are waiting to hear from them.

But, he emphasised, that what they have seen is in consistent with global best practice standard when it comes to providing legal education.

“And we are really excited about this for the future of the legal profession which is our own primary constituency, because ours is a committee where virtually, all members are lawyers and members of this profession.

“It was important for us to come here because we are not going to just write any report and take any decision based on sentiment. I mean, this is a nonpartisan legislative action.”

Senator Bamidele noted that Rivers State is boldly setting a standard for legal education in the country and it does appear to be a high one.

“After inspecting the ongoing works, his Excellency, the Governor also took us to inspect existing property that have been acquired for the purpose of surrendering these same property to the Law School to use as a source of revenue. That’s why I’m saying there’s a Rivers standard.

“And of course, when you now come to the quality of what is on ground, more than any of the Law Schools that have existed before the creation of this, we have seen quality here that will distinctly place this on the world map when you’re talking about Law School campuses that can stand the test of time.”

Senator Bamidele explained that having come to determine what actually is on ground and also to see the quality of work, they are fascinated to see about 750 workers on the construction site.

According to him, that is something that gladdens their hearts because at a time like this, the Rivers State government is able to provide such number of jobs to its people.

“There is a need for us to engage in activities that will create employment opportunities for our people. We have seen a lot of artisans here at work, contractors are here at work.

“A lot of building materials are being brought to this site and the economic implication of these are far reaching for Rivers State and on the long run for the Federal Republic of Nigeria.

“We do not take that for granted. Beyond the employment opportunities that this is creating temporarily, we also know that an additional campus of the Nigerian Law School taking off in Port Harcourt would also mean a long term career job opportunities for people who will also work here as administrative staff.

“The number of lecturers that will increase, as career people. We feel that’s another reason why this deserve to be celebrated.”

Senator Bamidele said except the Lagos campus of the Nigerian Law School that was created by an operation of law in 1962, the other five campuses were created by administrative action like the campus in Port Harcourt because it was approved by the President of the country.