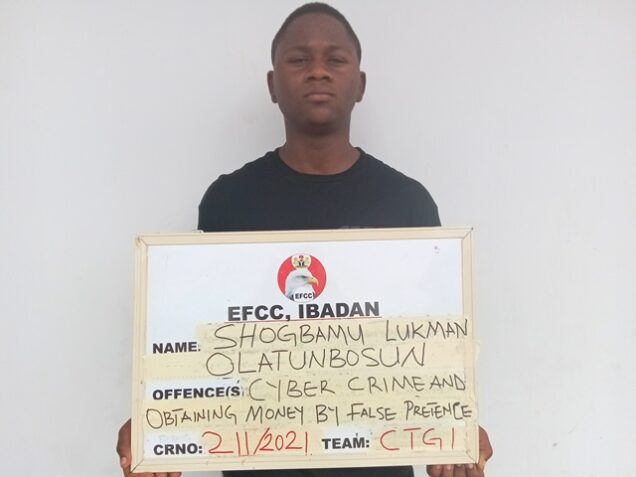 One of the convicts

They were all convicted on separate one count charges of fraudulent representation contrary to Section 22 (2) and punishable under Section 22 (2)(b)(iv) of Cybercrimes (Prohibition, Prevention, Etc) Act 2015.

The charge against one of the defendants reads, “That you, Akintokun Olalekan, sometime between the months of April, 2020 and March 2021 at Ibadan within the jurisdiction of this Honorable Court did impersonate a female gender known as Natalie Bryant with intent to gain advantage for yourself and thereby committed an offence contrary to Section 22(2)(b)(i) of the Cybercrimes (Prohibition, Prevention, Etc) Act, 2015 and punishable under Section 22(2)(b)(iv)of the same Act”.

Similarly, Justice Nathaniel Ayo-Emmanuel of the Federal High Court sitting in Oshogbo convicted and sentenced Durosaro to one month imprisonment.

The convicts are to restitute their various victims and forfeits the items recovered from them to the Federal government of Nigeria.

The court further ordered that all the convicts are to undertake to be of good behaviour after serving their jail terms.