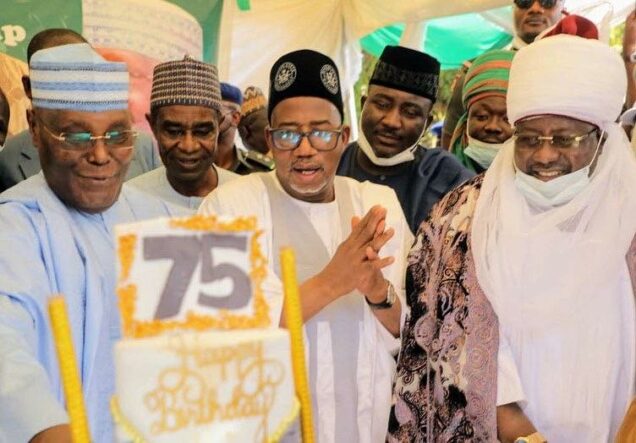 Atiku Abubakar given a birthday cake in Bauchi on Thursday

Former vice president, Alhaji Atiku Abubakar, on Thursday said he does not like celebrating birthdays, as he clocked 75 years.

Abubakar disclosed this in Bauchi while commissioning a 4.2 kilometres Gombe Road- Maiduguri Bypass, named after him by the state governor, Mr Bala Mohammed.

”Today, I read with emotions your birthday greetings to me. I don’t normally like celebrating birthdays but here you are today, making me celebrate birthday with a birthday cake and birthday bull.

“I never had it in my life like this. Your excellency, words alone are not enough for me to describe how I feel today.

“I want to appeal to the good people of Bauchi state to support their governor. Give him all the support that he needs as you can see that if you give him the support, he will also serve you very well.

“He is not a governor that is actually ruling or governing you, he is a governor who is serving you,” he said.

Abubakar also commended the state House of Assembly for its continued support to the executive , despite the fact that it’s being controlled by an opposition party, the All Progressives Congress (APC).

“It is a working opposition party. In other words, the development of the state is far more important to them than the differences in political beliefs.

“Mr Speaker, I want you to convey my appreciation to members of the state assembly for the cooperation you have been giving to the governor and I believe you will continue to give him,” Abubakar said.

The former vice president also appreciated the state governor and the people of Bauchi state for inviting him to commission the road as well as naming it after him, and called on all and sundry in the state to keep supporting the state government.

He added that their support would pave way for creation of more economic empowerments due to the antecedent of the governor, when he was the FCT minister under former President Goodluck Jonathan.