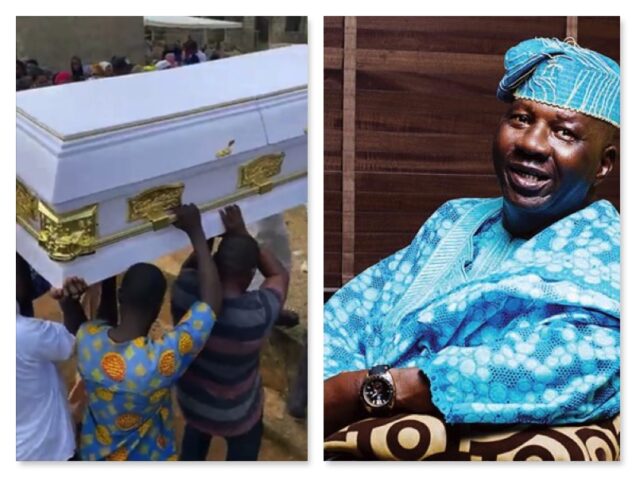 The body of Late Nollywood veteran actor, Babatunde Omidina aka Baba Suwe, has been buried according to Islamic rites. Well, not totally.

Baba Suwe, 63, died on Monday after a long battle with an undisclosed illness.

His son, Adesola Omidina disclosed that the burial would be held at his father’s residence in Ikorodu, Lagos.

However, the cleric Sheikh Ahamad Olanrewaju Alfulanny expressed dissatisfaction over the un-Islamic practices exhibited by the family and other well-wishers.

According to him, the Omidina family delayed the burial which is against Islamic practices.

“There are so many things that they are doing, that are un-Islamic. Like they put his body in a casket”, says Sheikh Alfulanny.

He said though, Baba Suwe, until his demise, was a celebrity muslim, that does not give room for unnecessary jamboree during burials.

“There are so many things that they are doing, that are un-Islamic, they put his body in a casket.

“Some other well-wishers even said they want to take his body round, but the family has told us they won’t bury him with his body inside the casket.”

A massive crowd gathered at Baba Suwe’s residence on Thursday morning to mourn and bid him farewell.